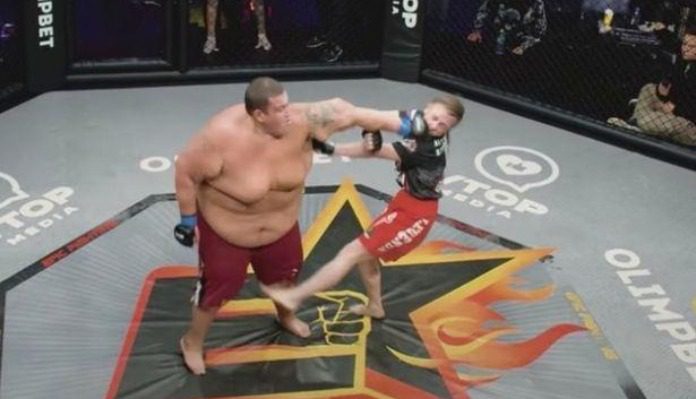 A female fighter in Russia went the distance in a fight with a 529-pound man in a card that featured a lot of whacky fights.

Russia’s Epic Fighting put on a number of bewildering contests including a 75-year-old man and his 18-year-old grandson in a two vs. one fight. But, the fight that grabbed the attention of the MMA world was Aleksandra Stepakova, a female bantamweight, facing a 529-pound man by the name of Grigory Chistyakov. This is of course the same big man that fought now Bellator bantamweight, Darina Mazdyuk, which the female won.

This time around, however, Chistyakov got his hand raised by way of decision. In the fight, Stepakova tried to keep the distance and avoid the power shots of Chistyakov. However, she didn’t do enough to win the fight as the 529lbs man got the judges’ decision.

Part of the fight can be seen below, including Chistyakov throwing actual punches showing this was in fact a real scrap.

Although some may turn their heads about it, Darina Mazdyuk said she wanted to do it as she knew it would get the attention of the UFC or Bellator which is what happens.

“It was actually me who initiated it,” Mazdyuk told MMA Junkie through an interpreter at a virtual Bellator 269 news conference Tuesday. “I got the idea of fighting someone huge and with that, there’s a promotional value not just for Russia, but for the U.S. and other countries. It turns out, this way I was able to draw attention to (myself). This way, I scored a Bellator contract…

“That actually was kind of the goal, to reach a lot of people and actually show the crowd that such fights can take place and how exciting they would be,” Mazdyuk said. “Such sports are particularly exciting and something to look at aside from your normal, classical, traditional point of view on fighting. That was the goal for me.”

What do you make of a Russian fighter facing a 529lbs man?