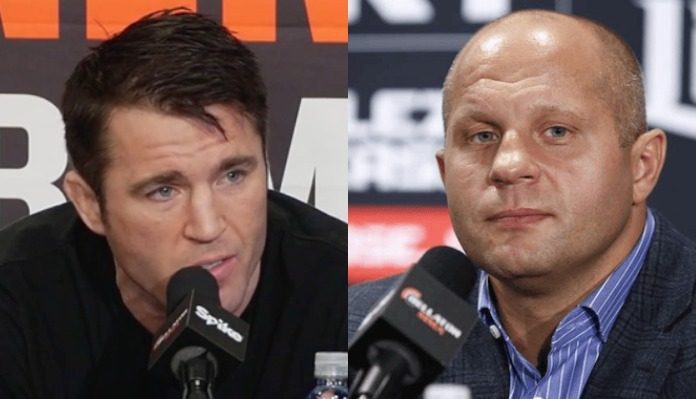 Bellator’s exciting Heavyweight Grand Prix is expected to continue in October, when Fedor Emelianenko and Chael Sonnen, and Matt Mitrione and Ryan Bader are expected to meet in a pair of semifinal bouts. No official dates have been locked down for these fights just yet, but they will occur close together on the calendar.

This news was first reported by MMAjunkie, who spoke to Bellator President Scott Coker after Bellator 201 in Temecula, California last weekend.

“We’re trying to keep [both bouts] in close proximity,” Coker said. “I want both of the semifinals to happen close together.”

Chael Sonnen earned his spot in the Bellator Heavyweight Grand Prix semifinals with a decision defeat of former UFC light heavyweight champ Quinton “Rampage” Jackson in January. Fedor Emelianenko, on the other hand, punched his ticket to the second round with a first-round drubbing of former UFC champ Frank Mir in April.

Matt Mitrione earned his second round spot with a majority decision defeat of fellow UFC veteran Roy Nelson in February. Bader, who currently holds Bellator light heavyweight belt, advanced to the second round with a 15-second KO of Muhammed “King Mo” Lawal in May.

Who do you think will come out on top this October, when Fedor Emelianenko battles Chael Sonnen, and Ryan Bader collides with Matt Mitrione? Who do you think we’ll see in the Grand Prix finals? Make your predictions in the comments section!