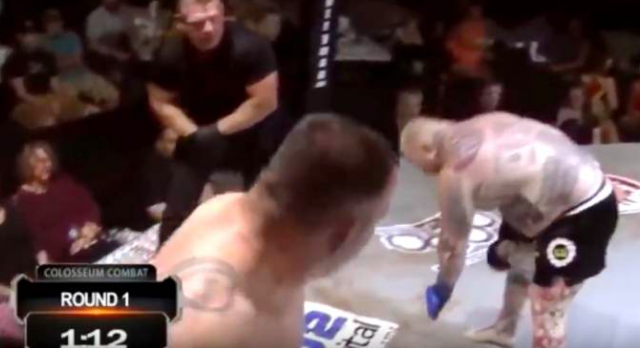 Over the weekend, 100-fight MMA veteran Jonathan Ivey stepped into the cage with 300-fight veteran Travis Fulton — a man he considers a personal hero.

In the midst of the first round, Ivey sent Fulton crashing to the mat with a punch, then followed to the canvas, where he unleashed a storm of ground-and-pound. But then, in an inexplicable twist, Ivey stood up, and tapped out, essentially throwing away the win.

So to recap.. Johnathan Ivey fakes a heart attack, drops Travis Fulton, proceeds to follow up with GNP… then decides he can't punch his idol in the face anymore and taps out. #mmathings pic.twitter.com/grK54YhOe0

Speaking to MMAjunkie this week, Ivey explained why he gave up on the very cusp of a win over his hero.

“Back in ’98 when I made my debut, it was on a HOOKnSHOOT card back when that was a big deal,” Ivey said. “I was on the undercard, and Travis Fulton was the main event that night. From then on, I always looked up to him. I got him tattooed on my leg maybe 10 years ago. I based my career on his, just how active he was, how he would always go in and fight guys in their hometowns. He was just that guy. He was a warrior to me. I wasn’t able to win some of the fights he won. He was always a little bit better than me. I was kind of like the poor man’s Travis Fulton, but I was OK with that.”

It was because he considers Fulton such a hero that Ivey dialled back the offense at the very moment he was about to win.

“After the second left [I landed on the ground], his eyes rolled back in his head,” Ivey said. “I turned to the ref and said, ‘OK, he’s done ref.’ The ref said, ‘No he’s not. Keep fighting.’ So I switch it up and throw a couple straight rights, thinking he’s fixing to jump in there. Then Travis comes back to, and he’s not defending himself but he switches his hips. I moved around and put my knee on his head, and then I started throwing some real light rights hands. He’s not defending himself. He’s defenceless. So I say to the ref, ‘Come on, this is it.’ And the ref says, ‘Keep fighting.’”

“If this had been some guy who’d been a real jerk to me, I’d have kept hitting him,” Ivey said. “But this was Travis Fulton, ‘The Ironman.’ So I hit him a couple more times, and I looked at the ref like, don’t make me keep hitting him. But the ref was adamant. So I stood up and backed away. The ref said, ‘What are you doing?’ I told him that if he wasn’t going to stop it, I would.”

“It was a split-second call,” Ivey concluded. “I’m just not going to stand there and hit Travis Fulton unnecessarily. I’d already hit him 15 or 20 times, and he wasn’t throwing anything back. He was defenseless.”

Oh, and that fake ‘heart attack’ that preceded Ivey’s knockdown? He was just playing up the impact of a kick for the crowd.

“The crowd went ‘oooh!’” Ivey said. “So I acted like it hurt me. I’ve seen people say I was faking a heart attack, or I was disrespecting him by doing that, but that wasn’t what I was doing. I like having fun in there. I’ve done stuff like that in 50 or 60 of my fights. I like playing it up for the crowd.”

With this strange outcome, Jonathan Ivey is now 41-57-0. Fulton, meanwhile, is now something in the area of 256-54-10, though his record is quickly reaching the realm of uncountability.

What do you think of Jonathan Ivey’s choice to tap out on the very precipice of a win over his hero Travis Fulton?