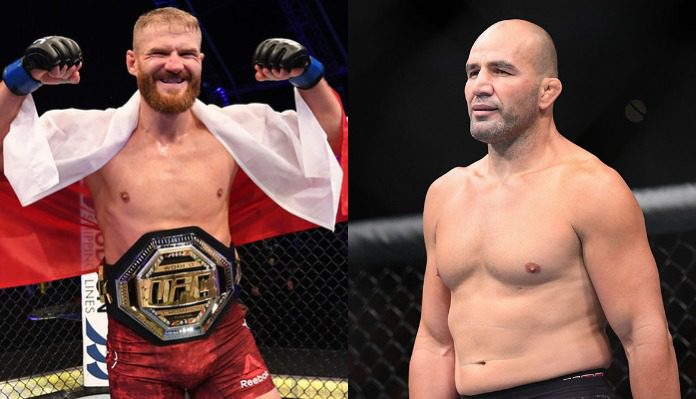 In the main event of UFC 267, Jan Blachowicz is set to defend his light heavyweight title for the second time as he battles Glover Teixeira. Ahead of the fight, Blachowicz is a -310 favorite while the challenger is a +245 underdog.

Ahead of the fight, BJPENN.com reached out to several pro fighters to get their prediction for the scrap. The majority of pros believe we will hear ‘And Still’ as Blachowicz will be too much for Teixeira.

Volkan Oezdemir. UFC light heavyweight: That is a very interesting matchup. I think Jan Blachowicz wins, he looks really incredible and is too well-rounded for Glover Teixeira.

Randy Brown, UFC welterweight: I’d like to see Glover Teixeira take it as I think he can use his grappling. But, I think Blachowicz defends his belt.

Marcin Tybura, UFC light heavyweight: I think Jan Blachowicz will keep it standing and will be able to beat Teixeira on the feet.

Charles Rosa, UFC featherweight: That is a very close one but I lean slightly towards Blachowicz. It’s a 50-50 fight as both of them are savages

Jeff Molina, UFC flyweight: Jan Blachowicz will stop Glover Teixeira in the third or fourth round to defend his belt.

Joe Solecki, UFC lightweight: I think Blachowicz, he’s shown he’s too technical on the feet and is well-rounded that he’ll box up Teixeira to defend his belt.

Tim Elliott, UFC flyweight: Jan Blachowicz has looked so good as of late that I think he keeps it standing and gets a late TKO.

Jared Gordon, UFC lightweight: I’d love to see Glover win, man. But, Jan is a beast, on paper I think Jan is the better fighter and will win but I’m rooting for Glover.

Ike Villaneuva, UFC light heavyweight: I’m going with Glover Teixeira. I think he can survive the first couple of rounds and have success later on.

Jalin Turner, UFC lightweight: It’s going to be a good fight, something in my heart tells me Glover Teixeira pulls it off. It just seems like he’s destined to be the champ.

Who do you think wins the UFC 267 main event between Jan Blachowicz and Glover Teixeira?