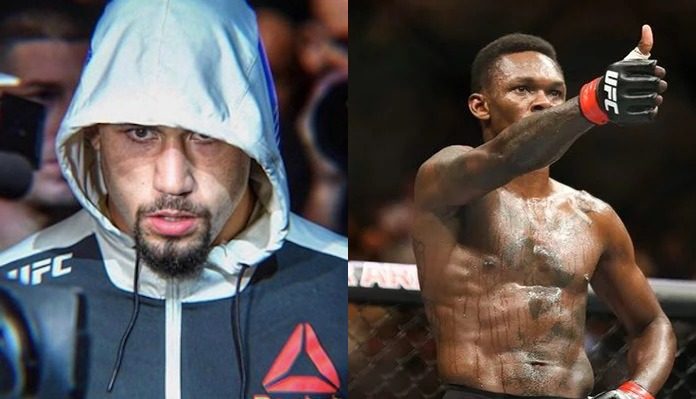 In the main event of UFC 243, Robert Whittaker is looking to defend his middleweight title against the interim champion, Israel Adesanya. Heading into this fight, the champion is a -110 underdog while “The Last Stylebender” is a -120 favorite.

Ahead of the fight, BJPENN.com reached out to several pro fighters to get their predictions for the scrap. As the odds suggest, the pros truly believe it is a pick’em fight, but the majority believe Robert Whittaker gets it done.

Jack Hermansson, UFC middleweight: I think Whittaker will win and he will win by KO/TKO, in the second or third round.

Marvin Vettori, UFC middleweight: I don’t think Adesanya will win. Robert Whittaker is playing a good mental game and has the skillset to neutralize Adesanya. It is an entertaining fight though.

Gilbert Burns, UFC welterweight: I like both fighters a lot. I’m a fan of both fighters so it is hard to say as they match up so well stylistically. If I had to pick, I think we hear “And New” as Adesanya wins.

Kyle Nelson, UFC featherweight: I like Whittaker. I have counted him out before against Yoel Romero and he always pulls it through. I’m still not sold on Adesanya, and I think there are some areas he can be exposed in and I think Whittaker can do that.

Jack Shore, UFC bantamweight: That is a tough one. It could go either way but I think Adesanya edges it out. That is truly anyone’s fight and either could finish the other at any time.

Tristan Connelly, UFC welterweight: I can argue hard for either fighter to win that fight. But, I think Adesanya will probably get it done as his striking is better. He will be able to keep the fight on the feet, but I’m like 51% sure he will win, 49% sure Whittaker wins. It is such a close fight, I think it goes the distance,

Hunter Azure, UFC bantamweight: That is going to be a good fight. I think Whittaker remains the champ. It will be a five-round fight, but his experience and more of his championship fights will help him get the win.

Yorgan De Castro, UFC heavyweight: I think Robert Whittaker. I think he will win by knockout.

Who do you think will win the fight between Robert Whittaker vs. Israel Adesanya at UFC 243? Let us know in the comment section.