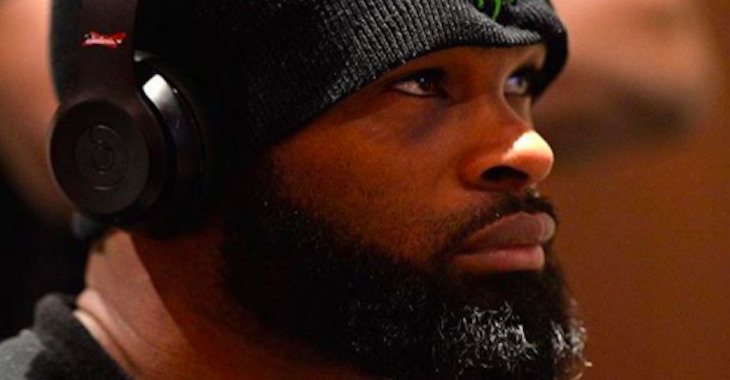 UFC welterweight champ Tyron Woodley (18-3-1) successfully defended his title this past weekend in Anaheim, scoring a unanimous decision victory over top contender Demian Maia in the co-main event of UFC 214. “The Chosen One” was able to stuff all 21 of Demian Maia’s takedown attempts, and left the Brazilian submission specialist with two badly swollen eyes.

Shortly following the UFC 214 event, Tyron Woodley revealed that he had suffered a torn labrum during the opening five minutes of his bout with Maia. On Wednesday, “T-Wood” spoke to BJPENN.com’s Chris Taylor about his five-round fight with Maia at UFC 214 and how the shoulder injury affected his performance:

“To be honest Chris, I think things happen for a reason,” he said. “I’m not saying that god made me become injured in the fight but I was forced to use the medium power, meaning more combinations style of fighting and that is part of my game that I have never really shown. Usually I just try and bomb on guys and that is what fans have come to know me for. I think that is what they have come to expect from me and they didn’t see that. Maybe that is why some people expected a different type of fight but with tearing by labrum in the first-round, I was forced to throw straight punches, I was forced to throw combinations, use head motion and counter, defend shots, you know things of that nature. At the end of the day, I still love the way that the performance happened. I still love the way that the fight took place. I love that I completely made [Maia] look silly. You know there were times he went for a leg and I just threw him in the other direction and walked away. It was almost as if I was saying ‘there is no way you’re going to take me down brother, quit trying’. I was faster than him and I was stronger than him. If I could change anything, you know obviously I would change my shoulder injury, but other than that there were a few times in the fight where I was inching forward looking like I was about to throw a big punch and I held it. I think in the flurries, where I had him covering up, that would have been the best opportunity for myself to maybe hit him with some blows that could have possibly got him out of there.”

Shortly after UFC 214, UFC middleweight champion Michael Bisping blasted Tyron Woodley for his performance, and scoffed at the fact that the bout included the fewest strikes in UFC title fight history. Discussing Bisping’s comments, Taylor brought up the fact that Woodley has been the most active champion on the UFC roster, and that he’s been far less selective with respect to his opponents than Bisping has.

“Bisping’s last fight was against what, the number 15 guy in his division?” Woodley agreed. “Now he’s  fighting a welterweight who has been out of action for 4 years. Enough said.”

Woodley then discussed his next title fight, and whether he’s earned the right to pick his opponent:

“I think that nobody is deserving of anything,” he said. “I don’t think Bisping is deserving of any certain fight. I just think that at the end of the day it is on the organization. They choose what they want to  do and what will be the most lucrative at the current moment. As you’ve said before Chris, I have been fighting all of the number one contenders. Not too many champions can say that. It’s almost becoming a lost part in our sport. I fought [Stephen Thompson] twice, I fought Demian Maia once, I out-bullied the boogeyman. You know everybody was so sure that Robbie [Lawler] was going to knock me out and he didn’t even land one punch in the fight. I landed the only significant shots in my fights with Thompson, who was on a seven-fight win streak. I outclassed Maia, who has something like nineteen wins in the UFC and was on a seven fight win streak. He had taken down his last twelve opponents. He couldn’t get me down once. Not even one time. With that said, I am the champion and I will defend my belt against whoever the UFC puts in front of me.”

Who do you think Tyron Woodley should fight next?