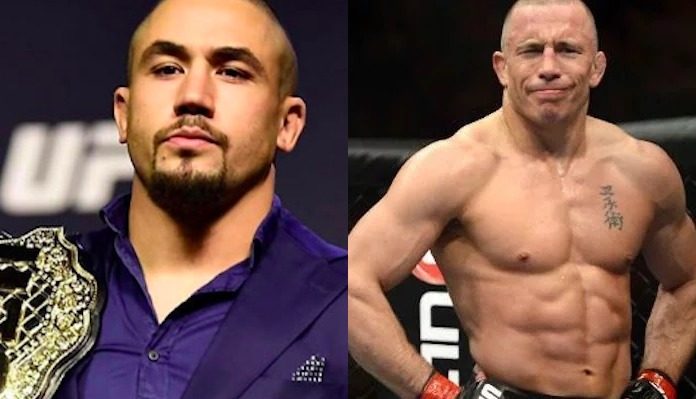 “Maybe you’ll see Robert Whittaker using a style that I think is the one that suits him better but he never really needed it because it was always comfortable for him on the feet for most of his fights,” Prates told MMA Fighting, discussing Whittaker’s looming showdown with Israel Adesanya. “With Yoel Romero, for example, it would have been stupid to try to take him down. But Robert has great wrestling and great timing. I honestly think Robert is a better version of GSP. And we might see this now.”

“Honestly, I think there was a fair bit of misunderstanding in translation,” Whittaker told BJPENN.com. “He is a huge fan, he will be the first to admit he is a huge fan of Georges St-Pierre. I think it came across wrong of how he spoke about it.”

Whittaker and St-Pierre never shared the cage, yet the pair did come close in late 2017. After Georges St-Pierre beat Michael Bisping to become the middleweight champion, he was supposed to defend his title against Whittaker, who held the interim belt at the time. Unfortunately, St-Pierre retired and the fight never happened.

Whittaker admits part of him wanted the opportunity to fight a legend like St-Pierre, but another part of him would have had a hard time fighting somebody he’s such a big fan of.

“I am a huge fan of Georges St-Pierre and I think he is one of the GOATs for sure,” he said. “When I was the interim champ, I was looking forward to that camp, but yes and no. No, because he is such a nice guy and as a fan, I didn’t want to fight him. But, in the same perspective as a fan, I wanted to fight him. It is such a good fight and such a fight that will set the standard for me. I’m happy with the result, I’m happy we didn’t get to fight.”

Would you have liked to see Robert Whittaker and Georges St-Pierre share the Octagon?