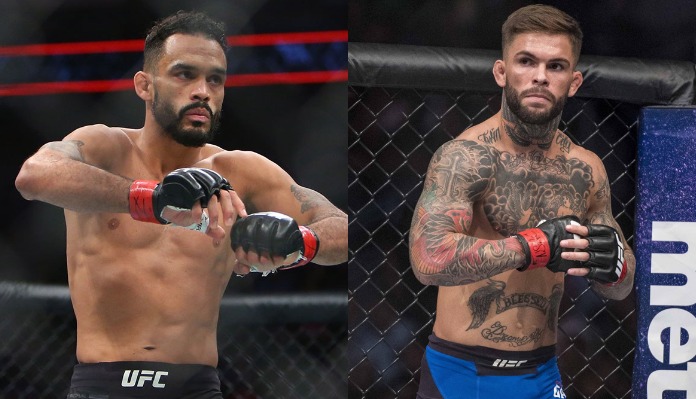 In the main event of UFC Vegas 27, Rob Font and Cody Garbrandt are set for a pivotal bantamweight fight. It’s an evenly matched fight and the odds have it as a pure pick’em as both men are -110.

Ahead of the fight, BJPENN.com reached out to several pro fighters to get their prediction for the scrap. The majority believe Cody Garbrandt gets the job done by KO to extend his winning streak to two.

Diego Ferreira, UFC lightweight: I think Garbrandt. He has the boxing and footwork to avoid the power shots and likely land his own to get the KO.

Geoff Neal, UFC welterweight: I think Cody Garbrandt. It’s a super close fight and should be an entertaining one.

Patrick Mix, Bellator bantamweight: Garbrandt. His striking and footwork is too good. He will be able to avoid the shots from Font and land some solid counters.

Cody Stamann, UFC bantamweight: Two boxers going at it and I think Cody Garbrandt will have some trouble getting inside Font’s jab. However, I do think Cody will use his wrestling and mix it up to get the win.

Jeff Molina, UFC flyweight: That is a scrap, man. I wonder what Cody shows up. Cody is so fast but Rob Font is a great boxer, hits hard, good sense of range. I think this fight ends inside the distance and I think Font gets the KO in the middle rounds.

TJ Brown, UFC featherweight: I think Font wins. He should be able to find Garbrandt’s chin and KO him.

Youssef Zalal, UFC featherweight: That’s a good fight and I like Rob Font to get it done, likely by KO.

Who do you think wins the UFC Vegas 27 main event between Rob Font and Cody Garbrandt?