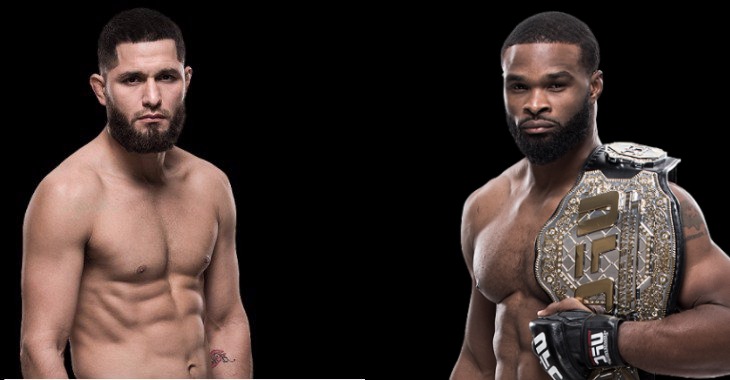 This weekend, on the main card of UFC 211, Demian Maia will risk the welterweight title shot many fans feel he has already earned when he takes on dangerous contender Jorge Masvidal. In the opinion of welterweight champion Tyron Woodley, Maia’s accepting this fight was not a smart move. The champ has now said on several occasions that he believes Masvidal – his former American Top Team stablemate – will earn the win, and deprive Maia of his long-awaited shot.

On the latest episode of BJ Penn Radio, Masvidal weighed in on these comments from Woodley, and on the possibility of fighting his former teammate for the belt.

“By his comments yeah, [he seems confident I’ll win]” Masvidal said. “I mean, Woodley knows as good as anybody it’s a fight. Anything can always happen. So I know there’s a small chance he’s also preparing for Maia, but he probably feels, at least off of what he’s been saying, that I’ll be the definite winner, you know? Based on our skillsets, what I can do and what Maia can do. So it’s just a matter of going out and performing. I know I’m better than this guy at fighting. At the sport of fighting, I know I’m better. If we’re talking about gi jiu jitsu at the mundials in Brazil, whatever, but if we’re talking, just locking the cage and see who comes out alive, I think I’ve got this guy by a long shot.”

Masvidal then explained that, while fighting a friend and former teammate is not ideal, he does take some pride in that American Top Team has produced so many top welterweights. Woodley, after all, was preceded by another ATT-based champion in Robbie Lawler.

“We haven’t spoken [about it] really,” Masvidal said of a possible fight with Woodley. “It’s not like we’ve gotta speak. I’m always cool with him, he’s cool with me. We’ve known each other for quite some time, since our Strikeforce days, you know. It was actually before that, since before he’d had a Strikeforce fight, we’d actually already trained a couple times together. It’s all love, but we’ve gotta do what we’ve gotta do. We’re both here to make money, to be the best in the world. It’s not that I’m happy, but it gives you a certain sense of pride when guys from your team, from your room, that you grinded with for so long, are in that higher caliber, you know? We’re all in the mix. It’s not that I want to fight another ATT guy, but then when you step back and look at it, that shows the world how good we are. What other team has ever done that? We just got the fight team award [at the World MMA Awards] now. Man, it’s been years in the making that we should have got that. Who else has done that? [The title has gone from] ATT, to ATT, to possibly another ATT guy holding the belt. That’s madness. Nobody’s ever done that in the history of the sport.”