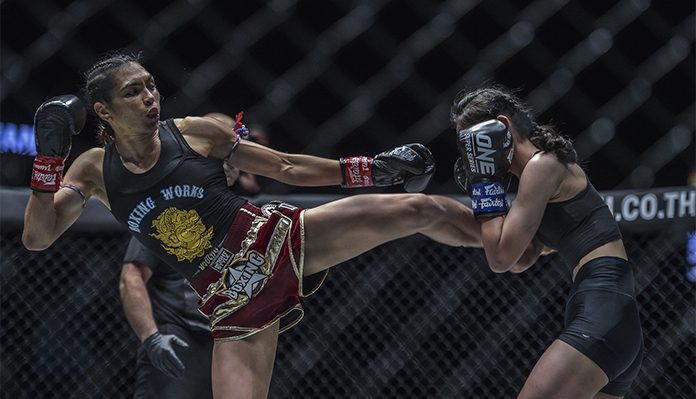 In late February of 2019, Janet Todd battled Stamp Fairtex for the inaugural ONE Strawweight Muay Thai World Championship. Todd lost that fight by decision, but in a few short days, she’ll get a second crack at Stamp under slightly different circumstances.

This Friday, in the main event of ONE: King of the Jungle, Todd will challenge Stamp for the ONE Strawweight Kickboxing World Championship — the other belt in the Thai’s trophy case.

“I’m super excited,” Todd said of her opportunity to battle Stamp in a second sport. “After the first time — I fought her pretty much a year ago — I wanted to be able to prove to myself and prove to others that I deserve a second chance. So I’m really looking forward to it.”

Todd earned her rematch with Stamp with three-straight victories: a pair of kickboxing wins over Chin Long Wang and former ONE titleholder Kai Ting Chuang, and a destructive, second-round head kick knockout over Ekaterina Vandaryeva in Muay Thai competition.

While her knockout of Vandaryeva was one of the most impressive ONE Championship wins of 2019, Todd wasn’t confident that it would earn her a title shot.

“Honestly, I didn’t know,” she said. “I didn’t know how many more fights I had to do to get another shot at the title, but I was hoping it was gonna come up soon. I just didn’t think it was going to be right after this one.”

It’s only been a year since Todd first battled Stamp, but she assures she’s made plenty of improvements in that time, as she learns a lot each time she steps into the ring or cage.

“Every fight, we watch the tape and make little adjustments,” she said. “So I feel like  with each fight I progressed a little bit more, little by little, to get me to the point where I am today.”

In fact, Todd says she learned a lot from her 2019 loss to Stamp. She intends to apply what she learned in their imminent rematch.

“After rewatching that fight a couple times, I really did notice that I didn’t have the confidence in the first couple rounds that I did in the fifth round,” she said. “[I need to make sure] I throw with confidence and throw with intention. I know, mentally, I felt like I was ready, but it was the first time fighting on a big show like that. Maybe all the new stuff got me a bit out of focus.”

Janet Todd made the preparations for her looming rematch with Stamp in Southern California, where she also works as an aerospace engineer. As you might expect, it’s occasionally difficult to balance her day job with her life as a fighter.

“I think that’s probably the biggest obstacle I have is being able to balance the two,” Todd admitted. “There’s times when I feel pressure from work at the same time that I have pressure for training to be ready for the fight. But I’ve become very good at time management and I do my best to manage my stress.”

With the bulk of her preparations out of the way, and now safely in Singapore for her fight, Todd is ready to execute. She’s confident she’ll get the job done and swipe the title from Stamp in a significant upset.

“I don’t have a Magic Eight Ball, and I know she’s a very tough girl, especially since we fought in MMA gloves and I know that she can take a hit,” Todd said of Stamp when asked for a prediction for their rematch. “I know it’s not gonna be an easy fight, where it’ll be a knockout in the first couple rounds. I think it’ll be a good back and forth match.”

This Janet Todd vs. Stamp Fairtex will air early on Friday morning in North America, on B/R Live, the ONE Championship Super App, or YouTube, depending on your region.