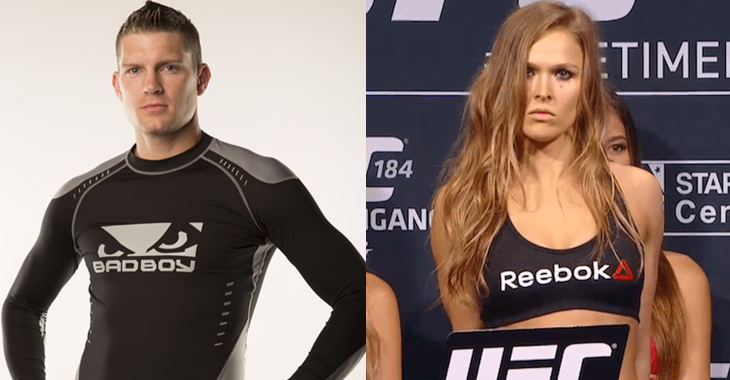 UFC President Dana White announced on Wednesday the return of former UFC women’s bantamweight champion Ronda Rousey. Rousey will step back into the Octagon and fight the current champion, Amanda Nunes for the title in December at UFC 207.

With Rousey’s return slated for December, it will be just a little over a year since she fought last in the Octagon against Holly Holm at UFC 193 where she was knocked out in the first loss of her professional MMA career.

With Rousey’s fight announced, Stephen “Wonderboy” Thompson was asked during his appearance on Wednesday’s episode of BJPenn.com Radio of her comeback.

“It really depends on where she is at mentally,” Thompson told BJPenn.com Radio host, “Kinch.” “I know after that fight it was devastating for her with the way it happened. A head kick knockout you know, it can take a lot of wind out of your sail. But, if Ronda is a true athlete, true martial artist, I think she’s gonna pick herself back up. She’s gonna get back out there better than ever — if her head is right. A lot of people can take that kind of a loss really hard and never come back from that.

“So, we’ll see where she’s at, where her head is at. If she’s going back to the gym and really focus on what she needs to focus on, her striking, her wrestling, jiu-jitsu. Also, what kind of people she has around her. A good coach, good people around her. Her family will pick her up from that and stay positive just like I’ve had that experience in my first loss ever, was to Matt Brown. It was devastating, man. I went back to the locker room man, just kind of let it all out. I had a lot of people come up to that fight to support me. I felt like I let them down but you know you what? I got good training partners that helped bring me back up and get focused. If it wasn’t for that loss, I wouldn’t be where I am today and I think she’s gonna do the same.” Do you agree with Stephen “Wonderboy” Thompson? Let us know how you see Ronda Rousey performing in the championship title fight against Amanda Nunes coming up in December!