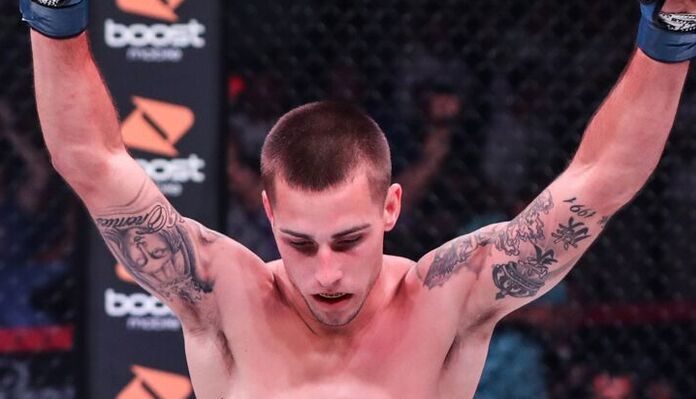 Ricky Bandejas has his next fight booked. The former CFFC interim bantamweight champion will return on January 26 at Bellator 214 against top contender Juan Archuleta.

Bandejas confirmed the news with BJPENN.com after an initial report by FloCombat.

“It was talked about for over a week and today is when we made it official,” Bandejas said to BJPENN.com. “It is exciting man. For me, it is an MMA fighters dream to be apart of a big card like this.”

Ricky Bandejas is coming off of an impressive knockout win over highly-touted prospect James Gallagher in August in his Bellator debut. With his emphatic victory, Bandejas went from being a relative unknown to a legitimate title contender.

Bandejas will now receive another step up in competition in the form of Juan Archuleta. According to Ricky, whoever emerges victorious in his fight with Archuleta will be granted the next title shot against reigning division champion Darrion Caldwell.

“Dude, when I beat him that puts me at the top of the food chain. There is no more excuse,” Bandejas said. “I knocked Gallagher out and put an end to his hype train, there is no doubt in my mind I get a title shot. He is on a 16-fight win streak, I am on a six-fight winning streak, just knocked out Gallagher. There is no argument, the winner gets the title shot.”

There is no question this will be Ricky’s toughest fight to date. Bandejas understands this and given the fact that the fight is next month, he has limited time to prepare. However, he knows he has what it takes to defeat Archuleta.

“Very tough fight. I know he is a gamer, he is tough, he is experienced, he has fought 22 guys. He is a multiple time champion, so I am expecting a hard fight,” he said. “I just have to train hard like I always do, and just show up. It is seven weeks, six weeks of training and the last week is weight cut. I prefer that. I like six-week training camps. I know a lot of fighters do 12 weeks or more, I like shorter camps where you go all out.”

Ultimately, this fight will add to a stacked Bellator 214 card that already features promotions Heavyweight Grand Prix final, Gegard Mousasi vs. Rafael Lovato Jr. for the middleweight title and the return of Aaron Pico. Bandejas is just excited for another tough opponent and expects it to be a great fight for the fans.

“I am expecting the best Juan Archuleta to date. He is going to show up and so am I. I expect fireworks!” he concluded.