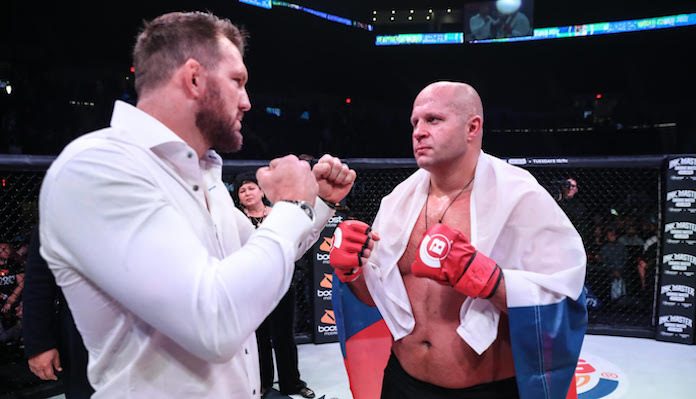 Bellator is about to wrap up their heavyweight grand prix on Saturday. The main event will see Ryan Bader, Bellator’s light heavyweight champion take on MMA legend Fedor Emelianenko.

If Bader is to come out on top he will be the first ever two-division champ in Bellator. Meanwhile, if Emelianenko wins, he cements his legacy even more and may very well be considered the greatest heavyweight of all-time.

Ahead of the tournament final, BJPENN.com reached out to several pro fighters for their predictions. Some believe Bader will come out on top but many are pulling for the legend. While one fighter believes it is too close to call.

Javy Ayala, Bellator heavyweight: That’s a tough one, I want Fedor to win. But, I feel like Bader will take him down and control the fight and get the win.

Elias Theodorou, UFC middleweight: I just say Bader because less mileage. Even though he fighting at heavyweight, Fedor is not the biggest heavyweight so this is a big opportunity for him to become a champ-champ in his own. Never bet against ‘The Last Emperor’ but I think just in many ways Bader gets it done.

Jon Fitch, Bellator welterweight: I don’t know. I think most old school fans want to see Fedor win but Bader is a beast. If he takes Fedor down I don’t see him getting submitted. If Bader tries to stand and trade he could get clipped but I just don’t think it will play out like that.

Allen Crowder, UFC heavyweight: Fedor was one of my favourite fighters growing up, I used to love watching him. He is getting a little older and Ryan Bader is a beast. He has only gotten better and better. I am going to go with Bader.

Jason Knight, former UFC featherweight: Bader. I think Bader probably has a better chance of winning. In my opinion I would say he is the better fighter but Fedor, that old bas*ard is hard to kill. Fedor can be doing bad the entire fight and then he lands that overhand right and you go to sleep. You never know.

Max Griffin, UFC welterweight: I see Fedor by knockout. Bader is a better wrestler but Fedor has that calm striking.

Kay Hansen, Invicta FC strawweight: I got Bader by second round TKO.

Ricky Bandejas, Bellator bantamweight taking on Juan Archuleta on this card: I have Bader winning, I see him finishing Fedor.

Who do you think will win the fight between Ryan Bader and Fedor Emelianenko?