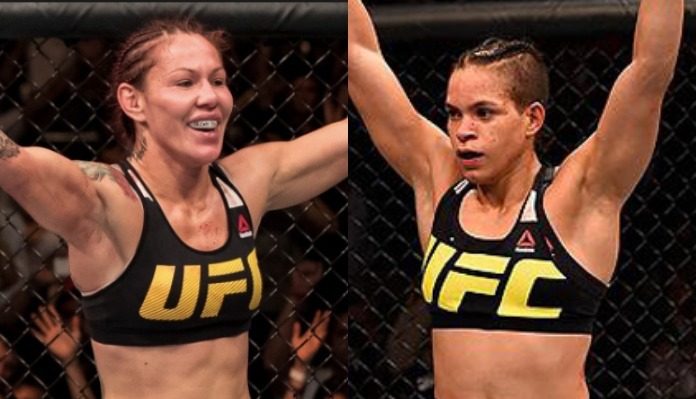 This Saturday night, in the co-main event of UFC 232 in Inglewood, California, UFC featherweight champ Cris Cyborg will look to defend her belt when bantamweight champion Amanda Nunes moves up in weight to challenge her.

There is no question that this will be one of Cyborg’s toughest tests to date, and because of that, fans are undecided on who will come out on top. Cyborg and Nunes’ fellow fighters, however, seem to be leaning toward the featherweight champ.

Damien Brown, RIZIN lightweight: Cris Cyborg by knockout. That is actually an interesting matchup. I don’t think Nunes can keep Cyborg off her. Not to discredit the striking of Nunes, she obviously hits very hard from what I saw. She has a decent weight cut. She should be roughly the same size. I still think Cyborg still has that pressure game. She is going to go forward and not give a s**t what Nunes throws at her. Nunes will lose because Cyborg’s pressure is too much and I think Cyborg will knock her out.

Zak Cummings, UFC middleweight: Amanda Nunes, I like the underdogs.

Sodiq Yusuff, UFC featherweight: Cris Cyborg by TKO. When it comes to Cyborg vs. Nunes, I’m going heavy on Cyborg. Nunes wins a lot of her fights based off the 1-2 and the rest is just physicality. Against Cyborg that physicality is out the window. There is more danger from her committing to the cross and when Cyborg answers back it is going to be rough.

Fernie Garcia, Golden Boy MMA Bantamweight: Cris Cyborg by third-round TKO. Cyborg is too strong for anyone at 145 and will win.

Matt Brown, UFC welterweight: I got Cris Cyborg there, just based on size.

Kyle Nelson, UFC featherweight/lightweight: I am going with Nunes for this one. She is a little smaller but I think she has the punching power to hurt Cyborg. Technique-wise they are fairly close, but that speed Nunes will have being a little smaller if she can get in and out, and land some big shots and not let Cyborg get off her big punches, then I can see Nunes winning. The longer it goes the better for Nunes being the smaller fighter. Especially if she is light on her feet and can move around a lot. I’m going Nunes by decision.

Kay Hansen, Invicta FC strawweight: I have to go with Cyborg. I do think it is going to be her biggest test to date and her toughest opponent to date. I have Cyborg. I’ve trained with her a couple times and seen her spar in the gym and she is an animal. I have never seen women and some men who have the strength and the handwork that she does. She is crazy, I got Cyborg in that one. That is going to be a good one.

Come back to BJPENN.com tomorrow for Fighters Picks: Jon Jones vs. Alexander Gustafsson.