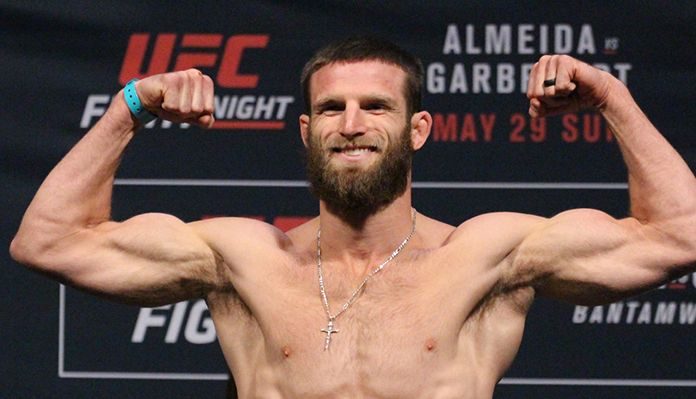 Jordan Rinaldi was in a must-win situation in his last fight. At UFC 230, he moved down to featherweight to take on Jason Knight, and was fresh off of a tough loss to Gregor Gillespie.

Rinaldi knew another loss could mean the end of his UFC career. Luckily, he ended up beating Knight by unanimous decision, protecting his job in the process.

“Absolutely, my back was against the wall,” Rinaldi told BJPENN.com. “After my first loss I figured the same in my next one. Definitely, the last one was a must-win, and honestly all of them are must wins. This is my career and this is where I have put my eggs in the basket. I’m trying to climb the ladder as soon as possible, and that is why I’m taking chances by taking fights with [Arnold] Allen and Gillespie. Just fighting guys higher ranked than you because you have to make your mark as you can so why not take those chances and be risky.”

After the win over Knight in November, Rinaldi hoped for a quick turnaround. Unfortunately, he couldn’t get a fight booked until March, which is one of his few complaints.

Yet the wait may very well have been worth it, as he is now fighting a well known name in Arnold Allen at UFC London this Saturday. As he says above, this is exactly the kind of opponent he was hoping to meet.

“Arnold is ranked I think 24 in the world,” he said. “Knight was ranked 15 at one point in the UFC, but I thought it would be someone in the top-30 in the world. This guy is a good, tough kid, he is on a six-fight winning streak and there is a reason why they are building him up. A win over Arnold will put me in a bigger spotlight on the cusp of the top-15.

“But, it depends on how I win,” Rinaldi added. “If I go out there and smash him in the first round, it will turn some heads and boost me a little more. If it is a split-decision win, then I just take his ranking. It is strange, the rankings.”

No matter how the fight unfolds, Rinaldi is confident he can leave London with a win, and hopefully a number beside his name. However, he knows Allen is a tough fighter and it won’t be easy.

“If you look at his last fight [against Mads Burnell], the guy had the right game plan and was winning the fight,” Rinaldi explained. “You have to be careful with Arnold because he has that explosive energy. But his opponent had a good game plan, and I just have to implement my game plan well. The other guys tried to wrestle which isn’t good. But, I understand what I have to do to get a win.”

This will be Rinaldi’s second fight since moving back down to featherweight. Now away from the lightweight division, he is confident he’s made the right choice.

“That was part of it,” he said. “When I got smashed by Gregor —that is what happened, he destroyed me — at that time he wasn’t even ranked, which he should have been. It made me think of how deep the division is. It really came down to the size and I am not a 155’er. I ran into a few 155’ers and asked them what their weights were and they were closer to 200 than anything and I was walking around fat and happy at 175. They are just way bigger than me.”

145 is a much better weight for Rinaldi, and after a hard training camp, the work is done. He is ready to be play the underdog role and come away with yet another win in London.