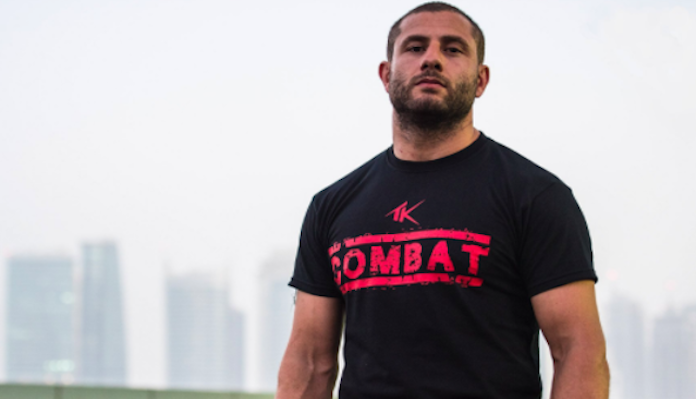 Former UFC middleweight champion Michael Bisping has been trying to find a suitable opponent for his retirement fight for some time, but seems to be having a little bit of difficulty doing so. Kickboxing legend Gokhan Saki, who is now firmly embedded as a member of the UFC light heavyweight roster, is hoping to make the search a little easier for the former middleweight champ.

Shortly after Bisping took to Twitter to ask the fans who they wanted to see him fight in his final bout, Saki threw his own name in the hat.

I asked ufc, they asked me. Honestly, who makes sense? Serious question? Up and comer? Old legend? I have no idea https://t.co/k32fpmeXac

“I asked UFC, they asked me,” Bisping said when asked about his final opponent. “Honestly, who makes sense? Serious question? Up and comer? Old legend? I have no idea.”

MMA Legend vs Kickboxing Legend @bisping i know both of them 😉 https://t.co/7LLHjBTN4C

“MMA Legend vs Kickboxing Legend,” he said. “I know both of them.”

Speaking to BJPenn.com’s Jason Kindschy this week, Saki elaborated on this callout of Bisping. Apparently, there is no beef of any kind, he just thinks it’s a fight that makes sense.

“Beef? No man,” Saki said. “I like the guy and respect him. He is a legend. I just saw his tweet and responded. When I came to the UFC, all the headlines said [things like] ‘Kickboxing Legend signs UFC Contract.’ When I saw Bisping’s Tweet, my first thought was MMA legend vs. Kickboxing legend. If the UFC and UFC Europe really want to take the UFC to the next level in Europe, they really need to start booking these kinds of fights. Bisping and myself, we have both huge fanbases in Europe. This fight doesn’t even need promotion, we are the promotion. You have seen the buzz it created by only me Tweeting about it, the fans went wild. In all different languages I saw articles about Saki vs. Bisping. He would be a great opponent to fight, he can swing, and his cardio is endless. I think this would be a great match.”

Saki, of course, is currently booked to fight fellow knockout artist Khalil Rountree on the stacked UFC 226 card this July 7. While he wants to fight Bisping, he has no intention of leaving Rountree in the cold. Instead, he plans to dispatch of the American in July, then shift his focus to the Brit.

“First Rountree,” Saki said. “After Rountree, we will see what is next. Bisping is not in a hurry so if he is interested we can discuss a date.”

If it sounds to you like Gokhan Saki is confident he’ll beat Khalil Rountree, well, you’re correct. The kickboxing icon doesn’t seem to be stressed about the matchup. In his eyes, the stress is all Rountree’s.

“I don’t think about Rountree,” he said. “What is there to think about? He is the one who has to be worried. I know he is thinking of me everyday, every second. Each day that goes by, July 7th comes closer, and that is a bad day for him. So imagine you are this guy, how many thoughts you would have… Would you even be able to sleep? [He’s thinking] ‘What will happen to my career when i lose to Saki?’ and this and that. Too much stress.”

If Gokhan Saki gets by Khalil Rountree, would you be interested in seeing him battle Michael Bisping?