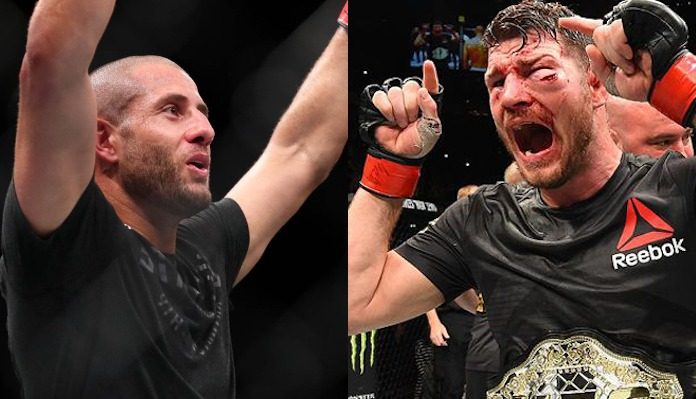 If former UFC middleweight king Michael Bisping fights again, it will be the final bout of his career. Given that his next fight will be his last, “The Count” has been waiting for a special opponent. Kickboxing legend Gokhan Saki is hoping to be that opponent.

Saki, who picked up his first UFC win back in September, called for a bout with the Brit on social media, after Bisping asked the fans who they wanted to see him fight.

I asked ufc, they asked me. Honestly, who makes sense? Serious question? Up and comer? Old legend? I have no idea https://t.co/k32fpmeXac

“I asked UFC, they asked me,” Bisping said when asked about his final opponent. “Honestly, who makes sense? Serious question? Up and comer? Old legend? I have no idea.”

Saki then replied with an emoji, and strengthened his case in a followup Tweet.

MMA Legend vs Kickboxing Legend @bisping i know both of them 😉 https://t.co/7LLHjBTN4C

“MMA Legend vs Kickboxing Legend,” he said. “I know both of them.”

Gokhan Saki, who went 83-12 as a kickboxer, is 1-1 in MMA. His first bout, which he lost by TKO, occurred all the way back in 2004. His next and most recent bout, which marked his anticipated UFC debut, was a first-round KO win at the expense of Luis Henrique. Saki is currently slated for a UFC 226 showdown with fellow knockout puncher Khalil Rountree, which was originally supposed to occur late last year.

Bisping, meanwhile, last fought in November, when he was knocked out by Kelvin Gastelum in a short-notice fight. This bout was preceded by a submission loss to Georges St-Pierre, which marked the end of his title reign. Before that, Bisping defeated Dan Henderson to retain his title, and Luke Rockhold to win it. The MMA legend is a strong 30-9 overall.

Who do you want to see Michael Bisping fight in his retirement fight? Do you think Gokhan Saki ticks all the boxes?