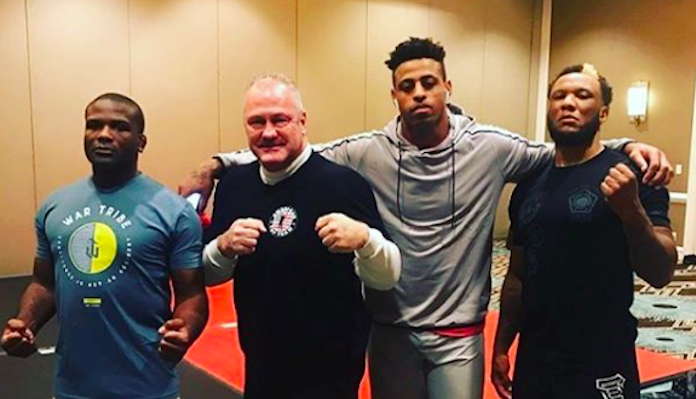 Greg Hardy will be making his promotional debut at UFC Brooklyn on Saturday, when he takes on Allen Crowder in the ESPN+ co-main event. The placement of Hardy on the card has drawn plenty of criticism from plenty of people not only cause of Hardy’s past but also because Rachael Ostovich is on the card as well.

Hardy, well-known as former defensive end superstar in the NFL, had his career cut short due to domestic violence allegations which will be the dark cloud that follows him every single day throughout his career.

Since leaving the NFL, Hardy made the jump to MMA and ran through amateur competition and in an even bigger step, joined American Top Team gym which is home to many champions and current stars. While Hardy comes in with a background of being on top of his previous sport and being in the spotlight, his coach says he’s been very humble as he journeys into the world of mixed martial arts.

In an exclusive interview with BJPenn.com, American Top Team coach Din Thomas spoke about his decision to train Hardy, the difference he’s seen since Hardy joined the gym, and how MMA has given the former NFL star a second chance.

Thomas says he only knows the Greg Hardy that entered his gym two years ago, looking to achieve a dream.

“The only Greg Hardy I know is the one that I met two years ago,” he said. “That’s been a guy with hard work, dedication, and wanting to be the best fighter he can be. I’m in a position to give him that and that’s all it’s been since I met, since the first day he walked into my office and said he wanted to do this, he told me it wasn’t a gimmick for him. That’s all I really know about Greg, I only know that side of him. It’s been great, I can’t really complain about Greg. I’m good friends with his management team and we all see the same thing, we see a guy who just trains really hard, he’s really dedicated and passionate. He wants to improve on fighting every single day, and I’m in a position to offer that to him and I give it to him.”

As a former NFL superstar, Greg Hardy didn’t have to walk into MMA even after he was jettisoned by the NFL, but when he decided to do so, he did so humbly. Thomas points out that since joining American Top Team, Hardy has treated it like an amateur fighter would and has lived in the dorms at the gym for the past two years.

“The man has lived in the dorms for two years, and I’ve been in there, it’s not easy,” he said. “It’s great for a camp if you want to be in there for two or three weeks, maybe even a month, but Greg has been in the dorms for two years. I mean, he goes home to his family every couple of months or weeks, but for the most of it, he’s in the dorm living, just grinding it out. He’s never asked for anything, he’s never asked for a pad session, the only thing he’s ever asked me for is how to do something better. Listen, I deal with all kinds of fighters, even some amateurs that I’ve taken a liking to have asked me for more than Greg has, and he played in the NFL. So humility, Greg Hardy has it.”

As for the technical side of coaching Greg Hardy, Din Thomas says in the two years that he’s spent in the gym and the dorms at American Top Team, he’s grown a lot as a fighter.

“He’s grown a lot, I mean he’s always had power and he’s strong, but he’s grown a lot,” Thomas said. “He’s worked on his mechanics, his punching mechanics, because that’s what really leads to knocking people out. Greg has spent a lot of time focusing on that and how to win fights, and how to be a fighter. It’s not just about throwing punches and kicks, and choking people out. You have to know how to be a fighter and these are things you have to be taught, and he’s learning that, he’s open-minded, he embraces everything he learns. What I like about him is that as he’s learning things, he’s coming up with his own way of doing things but he doesn’t do it blindly. If he says something good, I’ll say it’s great, but if he comes up with something whack, I’ll tell him let’s not do that.”

So why, through it all, would a UFC veteran like Din Thomas, who coaches and works with UFC champions like Amanda Nunes and Tyron Woodley, open himself up to the controversy of coaching Greg Hardy? Thomas believes the martial arts will expose us to the truth of the former NFL star.

“I’ll say this, I’m all into the martial arts because the martial arts will expose the truth in you,” he said. “At the end of the day, martial arts is all about honor and respect, and it’s telling the truth. When you’re out there inside that Octagon, the truth will be told. When I’m working with Greg Hardy, that’s what we see, to find the truth. Can you beat this man in front of you? That’s the reality of it and that’s the truth, can you beat this man with the same body parts? The fact that Greg Hardy has taken to that and put himself out there, saying this is what he wants to do and be vulnerable to putting the truth out there. That’s why I work with Greg, he’s risked getting knocked out in front of millions of people, he’s going to risk that just to do this. He works hard so that it doesn’t happen and that’s what I like about him, and that’s why I’m going to work him and help him reach his dream which is to be the best fighter on the planet.”

So as a fighter, just how good can Greg Hardy become? For his coach, it’s all about timing and the path that the UFC will set him out on, that’s where everyone will find out just how good he can be.

“If you give him enough time, I know he can become UFC champion, but the timing has to be right,” he said. “There’s a lot more to it. There’s so many moving parts with success in MMA. A lot of it is timing, being in the right place at the right time, winning some key fights, and just having some key moments in those fights, it all has to come together for you.”

“That’s going to be difficult for Greg cause those things have to align properly and the fact that he is so green in this sport, I know they’re going to try and push it faster which is going to force him to have to learn at an incredibly fast rate. There may be some things he can’t learn fast enough, that’s the reality of it. If you give him enough time, he can be UFC champion but if you push him too early, he could struggle. I know the UFC doesn’t have time to wait for Greg to get better. They have a business to run, so we have to do the best we can to make him as prepared as we can have him for the speed they want to push him.”

While Greg Hardy prepares to make his UFC debut in Brooklyn against Allen Crowder, the criticism has been loud and clear, people aren’t happy with his placement on the card but as his coach points out, he didn’t ask for this.

“What people don’t realize is that, Greg didn’t ask to be on this card,” he said. “In fact, he was slated to be on another card outside the UFC in December but they pulled him from that card and put him on this one. Now his dream has been to fight in the UFC, what do you expect him to say? They asked him to do this, he said yeah, and that’s the reality of this. He’s just a fighter who wants to fight. He’s got an opponent this weekend that is going to try and take his head off, the kid just wants to fight. He didn’t ask to be on this card, he didn’t ask to be in the co-main event, he’s just showing up and doing his job, doing what they’re paying him to do, and you can’t fault him for that. The nay-sayers can say what they want, but you can’t fault him for that.”

When Greg Hardy walked into the doors at American Top Team two years ago, he left a life with a troubled past that saw him as a former NFL superstar making millions of dollars, and gave himself to mixed martial arts. There will be criticism every step of the way throughout his fighting career, but Din Thomas saw something in Hardy, and that’s the drive and determination to be the best fighter he can become, and the well-respected UFC veteran and coach has been willing to give him the opportunity to achieve that dream.