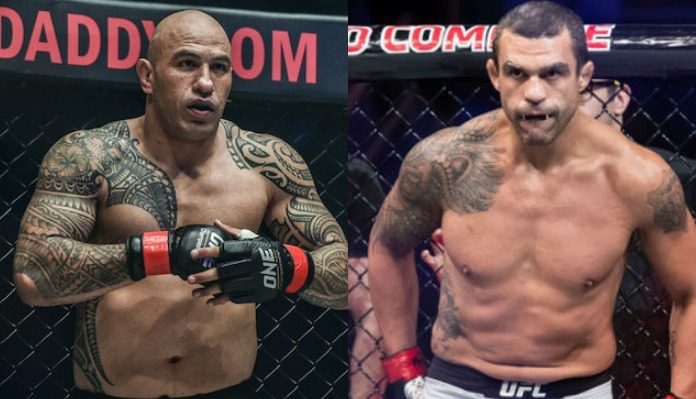 This fight with Aung La is currently consuming all of the Filipino-American titleholder’s focus. That being said, he is interested in a bout with new ONE Championship star Vitor Belfort, should the opportunity arise in the future.

“Of course,” Vera told BJPenn.com when asked if he’d be interested in a matchup with Belfort. “Anybody who would be challenging for the title would be an interesting match for me. I don’t care who it is or what the name is, if you’re coming for the title, yeah, it’s going to be you and I dancing.”

Vitor Belfort has not yet been scheduled for a ONE Championship debut, but the Brazilian legend has been campaigning for a special-rules boxing match with Roy Jones Jr. Brandon Vera thinks this fight would make a fantastic debut for Belfort, and believes the team behind ONE Championship are in a position to pull it off.

“I think that’s really, really cool,” he said of a potential Belfort vs. Jones bout. “ONE Championship, being the largest sports media company in Asia, it’s perfect. It’s the perfect event, it’s the perfect people. Everything is too aligned for that not to happen. Roy Jones has shown interest and “The Phenom,” man, when he’s in shape, when his hands are flying… He was our best hope for a professional boxer in the MMA world for a long time. It would be very, very interesting to see what happens.

“I think they can do it,” he added. “I’ve never put anything past these guys, and I never doubt anyone at ONE Championship anymore. They just make things happen. I believe it could happen.”

Vitor Belfort is one of many high profile free agents to sign with ONE Championship of late. When asked if there’s any other stars that he’d like to see ONE sign — any opponents he’d really like to fight — Brandon Vera was quick to answer.

“Man, you know, I would absolutely love to be able to have a match against Mr. Jones again,” he said.

That being said, Vera recognizes that Jon Jones might not be the ideal fit for ONE Championship.

“With all of this of his problems and troubles, I don’t think he’ll ever be at ONE Championship,” he said. “He’s not our type of material. He’s not martial artist material. But he would probably be the one, if I could get a do-over or a genie wish, that would be it.”

While Jones is unlikely to wind up in ONE Championship, Vera believes the promotion will sign plenty of other free agents in the near future. As one of the first big-name fighters to sign with ONE, he says he often hears from other fighters who are interested in making the jump.

“It’s very gratifying, especially to hear from other athletes from around the world,” he said. “Like ‘Brandon, you stepped out ahead of everyone else and you made the right move a long time ago and everyone else should have followed your lead.’ That makes me feel like I did the right thing [by signing with ONE].

Who do you want to see Brandon Vera fight in the ONE Championship cage after Aung La N Sang?