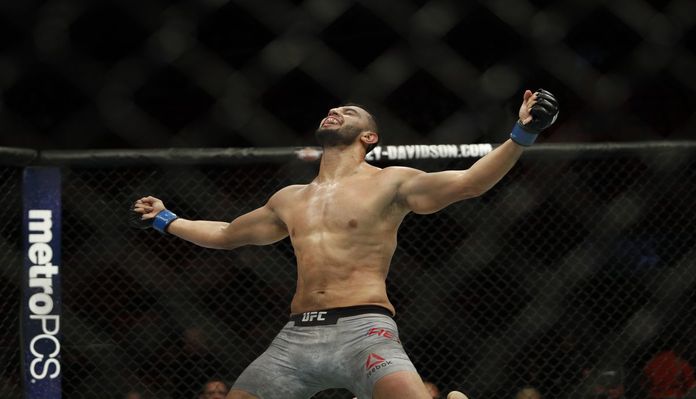 Dominick Reyes took home his most recent win against Jared Cannonier at UFC Chile, bringing his UFC record to 3-0 overall and his MMA career to an undefeated 9-0. Following the win, Reyes shot from unranked to #11 in the UFC light heavyweight rankings. Looking to return before year’s end, Reyes hopped on a call for an exclusive interview with BJPenn.com to give us a sneak peek at what lies ahead in the career of one of the most promising light heavyweight fighters we’ve seen in years:

You took home your most recent win, knocking out Jared Cannonier at UFC Chile. Can you talk me through that victory? How was the camp, the fight itself and how did it feel to keep your undefeated record intact?

The camp was excellent! I’ve been fortunate throughout my whole career I haven’t sustained very many injuries, staying healthy through camps and enjoying it. All in all, camp went great. It was a lot of fun. My main focus for this camp was boxing considering he was mainly a striker. As far as the fight goes, everything went great and according to plan. The weight cut was easy. We got to the fight, went out there and everything was flowing. The uppercut presented itself and I took it.

Post-fight in Chile, you called out Jordan Johnson, another undefeated light heavyweight on the roster. What prompted you to call him out and do you still have interest in that fight? Have you heard from his representation on whether they’re interested in the fight?

I haven’t heard anything from him or his people but I called out Jordan because, when I was in LFA he was talking trash and saying derogatory things towards me. I’m not sure why because I didn’t fight any of his teammates or anything like that he was just trying to put himself in the spotlight. He said a few things that were personal so I said to myself, “When the time comes, I’m gonna get you.” Now he’s 9-0, he’s 9-0 and I thought that would make for a good fight but we’ll see. I have to talk to [UFC Matchmaker] Mick [Maynard] and everyone in Chicago but I honestly don’t know if I’m looking at Johnson anymore he’s kind of behind me at this point.

Are there any other fights that interest you other than Jordan Johnson? You mentioned fighting at UFC 227 in Los Angeles, is that still your targeted date to return to the octagon?

At only nine fights into your career, you’ve already put together a three-fight UFC win streak and find yourself sitting at No. 11 in the rankings, just outside of the top 10. How do you feel about your career progression so far? Do you think it’s all happening a bit fast or are you happy with the pace the UFC has set for you?

I’m happy with the pace, this is a pace I’ve set for myself. In the beginning, I knew even before I started fighting that this was all going to happen quickly because there aren’t a lot of light heavyweights and I know I’m talented at what I do and if I was to be successful [which I am] that it was going to go very fast. The division needs young blood and that’s just how it goes. So, no I’m not upset with the progression. It’s gone all according to plan.

Previous to your MMA career you were a collegiate athlete playing football at Stony Brook University in New York and went as far as the NFL Draft Scouting Combine where you drew interest from several different teams yet ended up going undrafted. Did this help light your fire and move you towards your MMA career? What drove you to MMA?

It absolutely did. My career started out with pure anger and disappointment. I was pretty upset with that whole situation. My MMA training began purely as therapy, really nothing more. Then I realized I had a perfect body type and mentality for this sport. My athleticism coupled with my mentality has been a deadly combination. But yeah, it started out as therapy for my pure anger and now it’s the opposite. I do it out of love for the game.

Do you feel like you have an athletic edge over a lot of your competition? Given that you come from your football background, many feel the athletes in sports such as football and basketball are simply at a different level than the athletes coming into MMA right now.

You currently train at Joe Stephenson’s Cobra Kai in California The “Elite MMA Camp” debate is often brought up and whether moving to one of the big name camps is essential to truly become an elite fighter in the UFC. Does this ever cross your mind or are you happy where you are currently?

I’m pretty happy where I’m at. I do cross train at Team Elevation often. Guys like Curtis Blaydes and Neil Magny are good friends of mine. Great guys. I’ve trained with them for the past two years now. I also go down and get some sparring in at Black House. Those guys are really welcoming and cool. So yeah, I’ll definitely continue to cross-train and do my personal training at home. When I need more bodies I’ll get more bodies type of thing, you know?

Like I said previously, you’re nine fights into your professional career which can still be considered fairly “green”. Given that, there are bound to be some things you feel you need to improve on. What is the next step in terms of your progression? When you went back to the drawing board after your fight in Chile, what did you feel you needed to hone in on, whether it be striking, cardio, wrestling, BJJ, etc.?

Just like always, the way I approach my career is that I want to improve everything between camps. The last camp it was about strength and conditioning. Now it’s about continuing to improve that and improve my overall skillset. Right now its truly about cage-time for me. The more cage time I get the better. It’s all coming out pretty good so far, so I’m happy with it.

You’re one of the larger light heavyweights standing at 6’4″. How is your weight cut? Do you make the 205 limit fairly easily or is your cut one of the more frustrating parts of fight week for you. What weight do you walk around at?

I’m very disciplined. I work hard in and outside of the gym so I make it manageable. It’s not something that’s ever fun but if you take care of it and do it properly then it isn’t that stressful. I’ve never come into fight week like, “Oh my God, I’m not gonna make it!” I know I’m always going to make it. Having to wait until 4 pm would not be cool at all though. I’m absolutely in favor of the early weigh-ins. More time to recover and get back to normal brain function. As far as my walk-around weight I’m going to leave that as classified. We’ll leave that to mystery.

How soon do you see yourself contending with the light heavyweight top 5 and when do you think you’ll be contending for a title shot against guys like Daniel Cormier and Jon Jones? What is your timetable for the future?