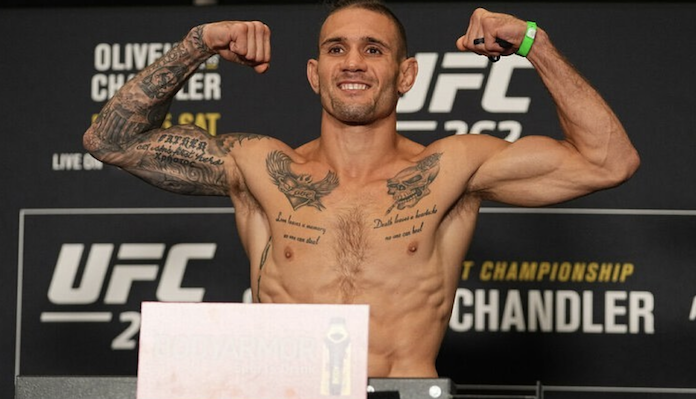 Christos Giagos was surprised when he found out he was offered to fight against the 14th-ranked lightweight, Arman Tsarukyan.

Giagos submitted Sean Soriano back at UFC 262 in May to extend his winning streak to two and he figured he would need a couple more wins to get a ranked opponent. Yet, with the UFC having a hard time finding an opponent for Tsarukyan, Giagos jumped at the chance to face him.

“I’ve heard around the grapevine that people are turning him down and it’s hard to get him a fight. I just took it as an opportunity to break into the top-15 and get ranked,” Giagos said on Just Scrap Radio on BJPENN.com. “It surprised me, but you take it when you can get them.”

Despite being on a two-fight winning streak, Giagos realized there was room for improvement and before he got the fight offer to fight Tsarukyan, he was looking to change gyms. He checked out a few gyms but settled on Sanford MMA which he knows is a massive help for this fight against a very good wrestler in Tsarukyan.

“I was looking up some gyms, I checked out American Top Team and talked to Mike Brown. My management pushed me toward Sanford as it is more of a team vibe and I like that,” Giagos explained. “I was like yeah, let’s go. It’s been good, every round has been tough here, it’s a different kind of push. It will make it a lot better, just getting work in with everyone I can.”

Although Arman Tasrukyan is a massive favorite over Christos Giagos at UFC Vegas 37, the American is confident in his skill set. He knows his wrestling and grappling are underrated. With that, he’s confident he will be able to scramble back to his feet. On the feet, he knows he’s the better striker.

If Giagos can keep the fight standing, he believes he will be able to outstrike Tsarukyan and likely win a decision.

“I think it will be a war, he will try and take me down and might succeed at his rate. I’m going to really focus on trying to reverse positions and get back to my feet. When I get back to my feet, make him pay for it,” Giagos said. “Just try to stay on top of my game and get my cardio up so I can push the pace as well. Never stop, if I’m on my back I’m either striking, getting back to my feet, just make it hard for him…

“With his decision rate, I kind of see it going the distance and score big on some of the rounds,” Giagos continued. “I will try to finish him, but he’s young and durable. You never know what will happen in a fight though.”

Should Christos Giagos do all that and pull off the upset, he knows it would be the biggest win of his career as it would put him into the lightweight ranks.

“It puts me in the top-15 and makes me climb the ladder. Hopefully head towards the top-10 after that,” Giagos concluded.