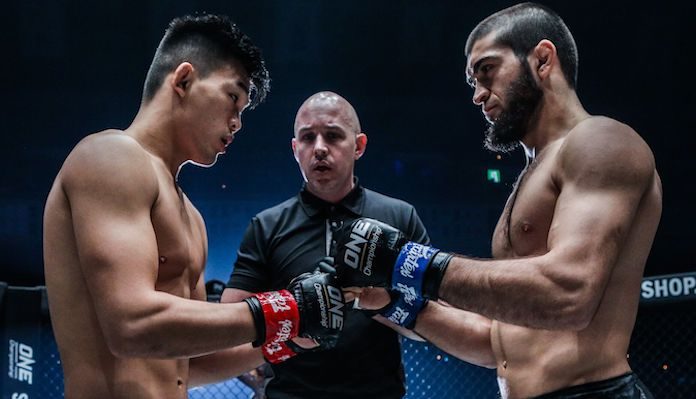 Christian Lee is the ONE lightweight champ, but many fans expected him to lose his short-notice fight with Saygid Guseyn “Dagi” Arslanaliev at ONE: Century – Part 1 in Tokyo on Sunday afternoon.

Lee happily silenced his doubters by battering Dagi to a unanimous decision victory.

“Even though I’m the champion, people were believing the hype [about Dagi],” he told BJPENN.com post-fight. “They thought he was untouchable. They thought if he touches you, you go to sleep, but I could see past it.

“I respect him, I respect his skills, he’s a very tough fighter, but I knew that if I could just weather the storm and implement my gameplan, I would be able to beat him and that’s what happened tonight.”

This is not to suggest Dagi doesn’t hit incredibly hard.

“He did hit very hard,” Lee admitted. “When you train so much, and you put so many hours in in the gym, you kind of learn how to absorb the shots in different ways. Without a doubt, if he catches anyone clean, he can put them to sleep. But I had my chin in the right places, and my body positioned at the right angles, and nothing was able to really hit with clean contact.”

Lee was able to tire Dagi out in the cage. He says this was a crucial part of his game plan heading into the matchup.

“It’s all about the strategy, and I knew that if I could go into his world — he loves his wrestling, it’s probably his strongest point aside from his hands — I knew I could dump him early it would get in his head and tire him out. And that’s what happened. I took him down early, and I basically just drowned him down there. I did plan on finishing him, I really did, but he’s a tough guy.”

Lee will now return to Hawaii with both the ONE lightweight belt and the lightweight grand prix belt — two hulking pieces of shimmering hardware he fears might not fit in his suitcase.

“I’m going to have to buy another [suitcase],” he laughed. “[The lightweight belt] could barely fit in, I don’t know what I’m going to do with this other one.”