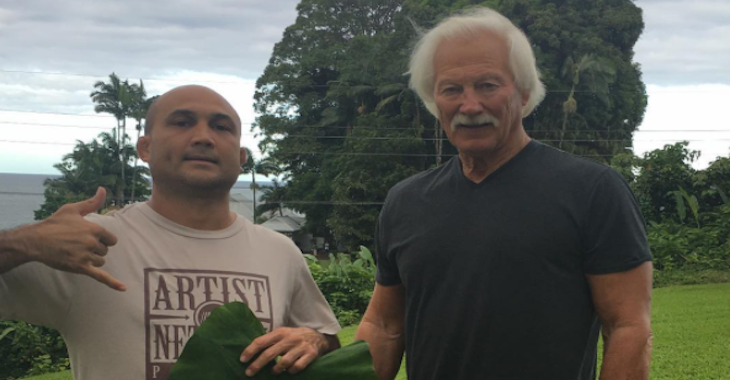 Ahead of his Sunday night Oklahoma City showdown with Dennis Siver, our own BJ Penn has been training with a familiar face in Gary Marinovich. Alongside his brother Marv, Marinovich helped Penn author his defeats of Kenny Florian and Diego Sanchez – two of the most impressive wins of his career.

On the latest episode of BJ Penn Radio, Penn broke down his choice to train with Marinovich in Hilo, rather than remaining with Greg Jackson and Mike Winkeljohn in Albuquerque.

“One of the hardest things to do is sit down and watch your last fight, but I decided ‘I gotta see what happened out there, I gotta see how I got picked apart,'” Penn said, referencing his January TKO loss to Yair Rodriguez. “The first thing I thought, right as I started watching it, I was like ‘man you’re slow. BJ, you’re slow.’ I couldn’t believe how slow I was. I almost fell into a depression being like ‘man you’re so slow.’ From there, I thought, ‘what can you do?’ I know you get old and you get slow and things happen and this and that. And then it just hit me. I said ‘call Marinovich, all they do is speed.’ We gotta get training.  So I called Marinovich, started doing his Marinovich training system and I feel just as good as I’ve ever been. But I’m not going to sit here and make you take my word for it. Watch the fight on Sunday and make your opinion about what’s going on.”

“The Marinovich brothers, they’re just the best at what they do,” Penn continued. “Marv is one of the guys who helped start the NFL combine. He was a strength and conditioning coach for the Los Angeles raiders for a long time. And I guess Marv’s thing is, him and his brother Gary – Gary is actually up in Oklahoma with me right now, we’re going to build a couple warmups to wake my body up on Friday and Saturday before the fights – but Marv started noticing that the guys with the strongest bench press, the strong squats, the strongest deadlifts, they weren’t the starters. And he started putting more emphasis into agility, balance, and speed. And that’s where they came up with the Marinovich training system.”

Penn then explained why he opted to stay in Hilo for this fight, rather than venture back to Albuquerque.

“I ended up spending all my time in Hilo,” he said. “I feel kind of bad, we never really got to talk to Greg Jackson or Winkeljohn after [the Rodriguez loss], because we had it in our heads like ‘hey let’s go do it again, one more time.’ Then the UFC put fight together with Siver. But I kind of stayed in Hilo. The real truth is that I left for a year and a half for my last fight. My kids grew up a year and a half older, and I got back and I was like ‘man, I can’t stay away from them.’ So I talked to Marv and Gary, and they said they could come down, and me and Rudy got back together. So, I’m real sad I’m not with Winkeljohn, Greg Jackson or Jason Parillo, but you know, I’m over here, I’m in great hands. I really think the training with Marinovich is going to make a big difference. I’m with my old trainer [Rudy Valentino], one of the most comfortable people I’ve ever been around. He knows exactly what I like, and he knows how to get the most out of me.”

How do you think BJ Penn will look in Oklahoma City this Sunday?