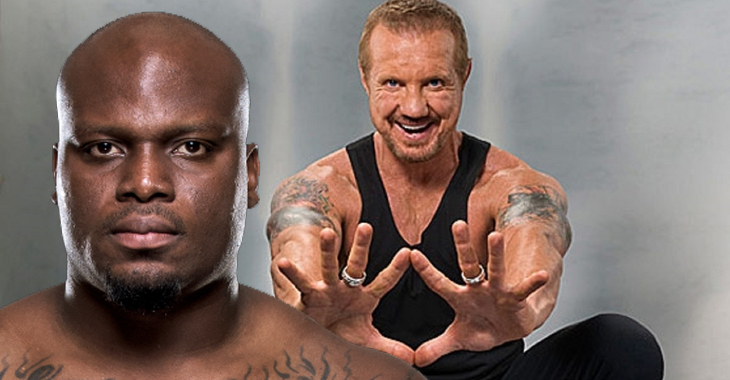 Fans were gutted with Derrick “The Black Beast” Lewis pulled out of his UFC 216 fight with Fabricio Werdum at the last minute. Referencing the same chronic back issue that he complained about in the Mark Hunt fight, Lewis said he could barely move and had slight paralyzation in his thighs. Speaking to Ariel Helwani yesterday on The MMA Hour, Lewis said he was brought to tears having to cancel a fight he was confident he’d win. Worse of all, he’s worried about how his back may affect his future. This is where Diamond Dallas Page comes in.

Cool to see @arielhelwani give @RealDDP @DDPYoga a shout out on #themmahour. I think lots of mma fighters could benefit from Dallas’ program

Somehow, some way, wrestling legend DDP was listening and messaged Helwani while still on air saying he could help. Since 2012, DDP has literally changed lives – including his own – with his version of yoga. If anyone can help Lewis, it might be it’s me, it’s me, it’s DDP. Not only could Diamond Dallas Page help keep Derrick Lewis’ career prospering, but does the UFC know what kind of co-promotion it would have on its hands? Immediately get the wheels in motion on their meeting and film Lewis’ recovery with DDP for a Fight Pass series.

“I was crying like a big-ass baby. My coach knew how much this fight means to me and I didn’t want to pull out for nothing. My coaches, they all convinced me that it’s probably the best thing to do to pull out because they knew I was going through the same problems with Mark Hunt and I didn’t pull out in that fight and it cost me. […] We’re just waiting on MRIs right now before we can start my treatment because they want to see what’s the issue first. The doctor I talked to Thursday he said that he’s willing to release me anytime, it’s up to me, but I really want to take the precautions to see what’s really wrong with my back.” — Derrick Lewis speaking to The MMA Hour.