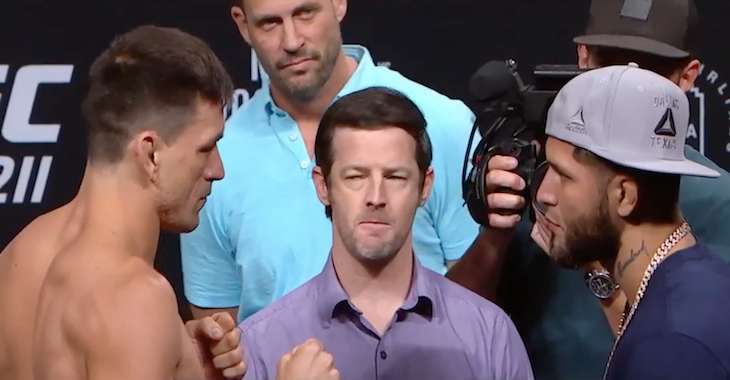 Top UFC welterweight contenders Demian Maia and Jorge Masvidal went to battle on the main card of last night’s UFC 211 event in Dallas, Texas with a potential shot at UFC gold on the line.

The fight went back and forth, as Maia was able to utilize his strong grappling skills to negate the spectacular striking abilities of Masvidal.

With that said, “Gamebred” did a fantastic job of defending Maia’s submission attempts throughout the fight and was able to batter the Brazilian with a barrage of kicks in round two.

After three strongly contested rounds of fighting, Demian Maia was awarded a split-decision victory over Jorge Masvidal by the judges in attendance (29-28, 28-29, 29-28).

Following the exhausting contest, it was revealed that Demian Maia will now receive his long awaited shot at UFC welterweight gold.

A date for Maia’s title fight with current welterweight kingpin Tyron Woodley has yet to be determined by UFC officials.

Following their UFC 211 scrap, Demian Maia and Jorge Masvidal got together for a photo and it was clear that there was nothing but respect between the two elite welterweights.

Thank you @GamebredFighter , it was great competing against you,you are a great fighter and we needed that test to learn more about myself. pic.twitter.com/Uyu9QwuLfx

Hats off to you man you truly are one of the greatest grapplers in this sport @demianmaia https://t.co/b2T3BG6zMO

Who would you like to see Jorge Masvidal fight in his next octagon appearance? Sound off PENN Nation!