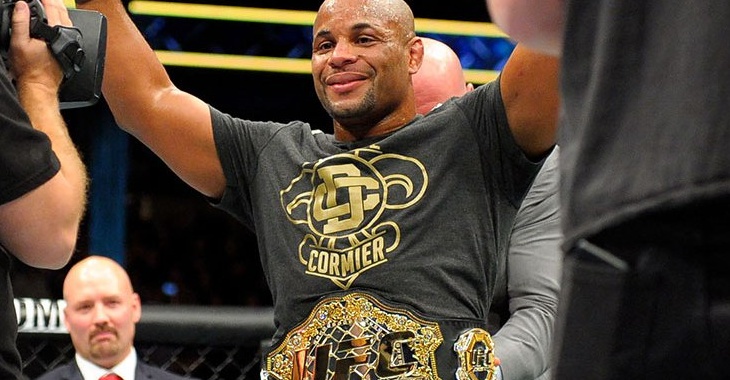 Current UFC light heavyweight champion Daniel Cormier will be fighting for more than just the promotions heavyweight title when he squares off with Stipe Miocic in the main event of UFC 226 this July in Las Vegas.

With that said, Cormier would also become only the second fighter in UFC history to hold two of the promotions belts simultaneously, this if he proves victorious against Miocic this summer in Sin City.

The first fighter to reach the aforementioned feet was of course current UFC lightweight champion Conor McGregor, who captured the promotions 155-pound title in November of 2016 when he knocked out Eddie Alvarez in the second-round of their event headliner in New York.

Unfortunately for fans of the Irish superstar, McGregor will be stripped of his UFC lightweight title as soon as the first strike is thrown between Tony Ferguson and Khabib Nurmagomedov in the headliner of next month’s UFC 223 event in Brooklyn.

Unlike McGregor, who never actually went on to defend either his featherweight or lightweight belt, Daniel Cormier has already proven himself as a legit champion in the light heavyweight division.

“DC” made quick work of his most recent opponent Volkan Oezdemir earlier this year at UFC 220 in Boston, scoring a second-round stoppage victory over the feared knockout artist.

In fact, the only setbacks of Daniel Cormier’s professional mixed martial arts career have come at the hands and feet of former UFC light heavyweight champion Jon “Bones” Jones.

That most recent “setback” to Jones, which occurred in the main event of UFC 214 in August of 2017, was eventually overturned to a no-contest this after “Bones” popped for banned substances. With a win over Stipe Miocic at UFC 226, an argument could be made that Daniel Cormier is quite possibly the greatest fighter of all-time.

That is not to take anything away from the accomplishments of fighters such as current UFC flyweight champion Demetrious Johnson or former UFC welterweight and middleweight champion Georges St-Pierre. But with a win over “The Baddest Man on the Planet” this July, Cormier should definitely be in the conversation for GOAT status.

That being said, a win over Miocic will be anything but easy. Stipe has proven himself as the greatest heavyweight champion in the promotions history.

Since capturing the promotions coveted heavyweight title by defeating Fabricio Werdum at UFC 198 in Brazil, Miocic has since gone on to defend his strap against formidable foes Junior Dos Santos, Alistair Overeem and most recently Francis Ngannou.

Hence why a win over Miocic would be such an amazing feet, even for a fighter as accomplished as Daniel Cormier.

Win or lose Daniel Cormier will make history at UFC 226, but a win could catapult the aging UFC legend to the top of a very select group of special fighters.