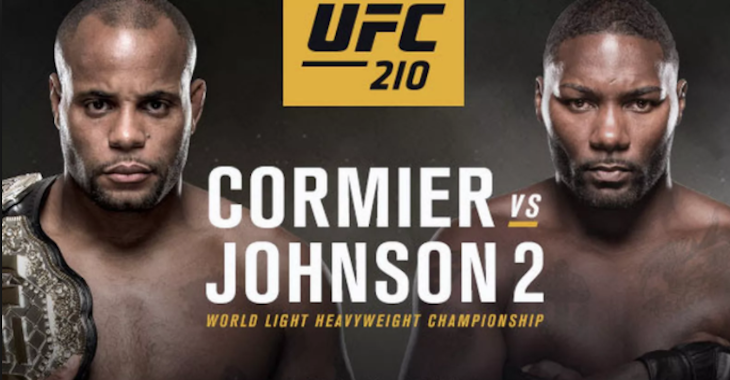 Back in 2015, Daniel Cormier stepped into the Octagon, fresh off his UFC 182 defeat to Jon Jones, to fight Anthony Johnson for the vacant light heavyweight championship. Cormier filled in for Jones at UFC 187, after Jones was stripped of the light heavyweight title for his infamous hit and run incident.

Despite being hit with a massive punch early on in the fight, Cormier managed to grind Johnson down, and eventually earn a 3rd round submission win to claim the vacant light heavyweight title. Now, ahead of his rematch with Johnson nearly two years later, he spoke to MMAJunkie to discuss what Johnson did well in the first fight, and how he can emerge from the second victorious.

“He did well,” Cormier told MMAjunkie. “He defended some takedowns. He actually landed a lot of high kicks. He landed a lot of punches. People just remember that big punch that knocked me down, but Anthony had a lot of success in that fight. So we need to make sure that he doesn’t even have that amount of success.

“I don’t feel like I pressured him enough in that fight. I let him get far too comfortable. So, you’re going to see some differences in my approach to this one. This time, I’m actually going to beat him much worse than I did last time. If the first fight was a pretty good performance, this fight is going to be a great performance.”

Despite Johnson’s seemingly superhuman knockout power, the champ has vowed to stand and trade with the heavy-handed Johnson. While this strategy has some fans worried for the champ, Cormier isn’t worried in the slightest: