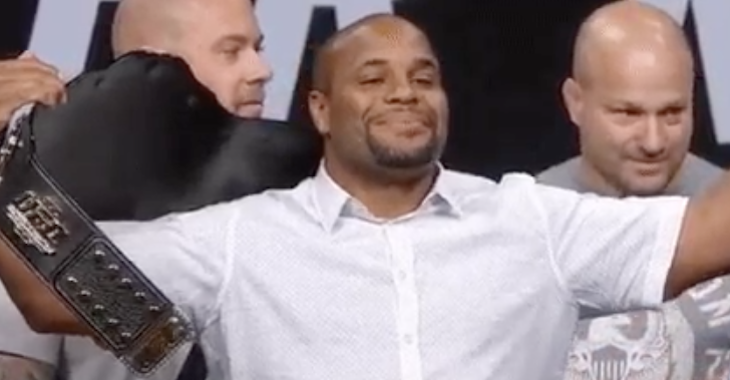 Daniel Cormier and Volkan Oezdemir stared down for the first time yesterday for their upcoming fight at UFC 220. While a couple of mild verbal jabs haven hit social media and while they were on the stage for the press conference, mostly it’s been pretty quiet as far as fight hype goes. However, after the presser, Oezdemir decided to take to Twitter and get things really started with the UFC light heavyweight champion. Daniel Cormier fired back while somehow incorporating his Game of Thrones fandom as well. …That’s impressive.

When you already know what’s going to happen but you let him talk… #enjoyyourlast3weeks #ufc220 pic.twitter.com/0BgGtje11N

“I’m going to throw you through the moon door! Make Baldy fly. Volkan [Oezdemir] honestly though, enjoy your weekend in Vegas. Love the fights, take it all in. I’m already back in San Jose on way to gym to train with a kickboxer who is two times more skilled than you. This ain’t a game. Different level.” — Daniel Cormier via his Twitter.

Me vs Volkan Oezdemir pic.twitter.com/yBbXKRhYa4

“Thank you! Yes, I’ll enjoy UFC 219. That’s awesome! Just be careful with him. I don’t want you to get hurt. I am the new level.” — Volkan Oezdemir via his Twitter

This isn’t the first time Daniel Cormier has used creative and funny tactics in an attempt to clown Volkan Oezdemir. He used an impromptu MTV Cribs-type tour of his accomplishments set to Young Jeezy to tell Oezdemir he should ‘keep dreaming’. We’ve still got a month to go before Cormier defends his belt, but it looks like we’re off to a good start. His title defense will be co-main event underneath the highly hyped heavyweight championship bout between Stipe Miocic and Francis Ngannou.