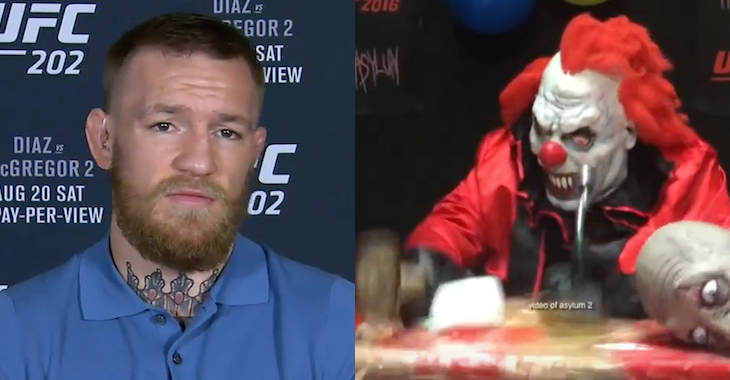 With Halloween approaching, the marketing team at The Asylum haunted house in Ireland just issued a great challenge.

Following UFC featherweight champion Conor McGregor commenting on the recent scary clown hysteria, “The Clown” at The Asylum challenged the UFC superstar to last 15 minutes in their haunted house. “The Clown” at The Asylum had a great response to what “The Notorious” had to say.

“Conor McGregor, I believe you’re trying to beat the head off me and shove my mask up my ass – well I dare you to come to The Asylum in Bruff Co. Limerick where we will frighten the shite out of you.”

“If you come down for five minutes, we’ll scare the life of ya. And 15 minutes with me and you’ll be wanting a nappy because you’ll be shitin’ your pants You’ll be going back to your mommy crying!”

“This isn’t Las Vegas. This is Bruff, where the crows fell off the trees with the hunger!”