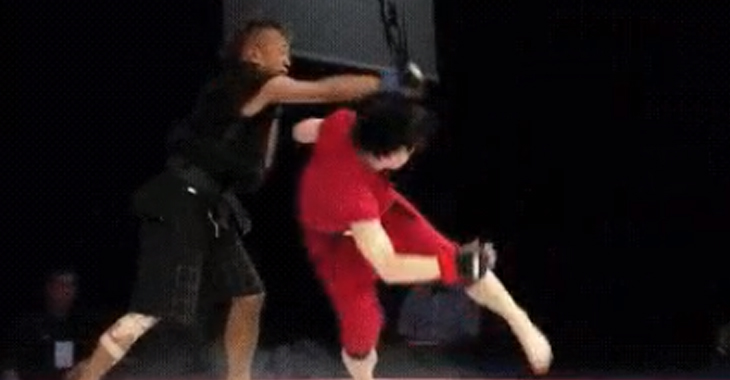 Justin Gaethje. Yair Rodruiguez. Peter Graham. Marius Zaraomskis. These are just a few of the men who have tried the extremely rare and mystical Rolling Thunder technique and landed. It will forever be known as the last technique Dan Henderson threw in his illustrious MMA Career at UFC 204 against Michael Bisping. Even legends can not contain the mystery that is this weird, somersault axe kick strike. It’s skill, mixed with a lot of luck and a big handful of magic dust. Last night at Ganryujima’s ninth event, ‘Tiger’ Satoshi Date pulled it off against Shunsuki Kazuki in Japan. …And he didn’t just land it, but knocked Kazuki clean out.

Call it a dedication to the art, or fate smiling down, but Satoshi Date landed it and Ganryujima is getting more press now than it has in its history. Although, showing up to the presser dressed as Japanese pro-wrestling legend and cultural icon Tiger Mask probably helped sway his odds. You can’t help but root for a a fighter who shows up dressed like that and is out there flipping frontwards trying to hit his opponent with his heels. If this highlight reel knockout by Satoshi Date and the unique set-up intrigues you, it’s time you get introduced to Moat Fighting. It’s kind of like MMA mixed with Sumo if it happened on the set of the movie Bloodsport. You can knock you opponent out, you can submit them, and if you throw them off the platform three times in one round, you win by ‘moating’. This event just happened live last night, but FiteTV is bringing the replay to America for the first time this Sunday at 10PM EST.

Here is Marius Zaromskis’ Rolling Thunder kick on Bruno Carvalho back in 2011 for good measure.