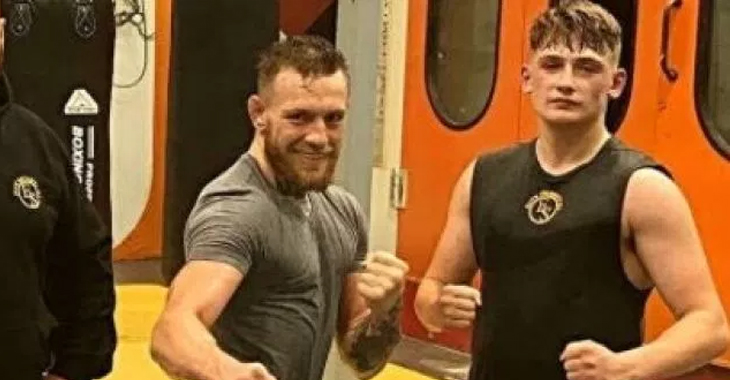 As much as Conor McGregor’s boxing camp in preparation for Floyd Mayweather has been about war and sharpening his skills, it’s also been a straight up gossip factory. He has his tight knit crew with him behind those closed doors, only the pictures he wants out, gets out. Of course, each one is going to make McGregor look better than the last. The controversy of short-lived sparring partner Paul Malignaggi and that infamous “knockdown photo” has made the rounds and back again. Tiernan Bradley, Irish boxing prospect and one who has stuck around for camp, claims Malignaggi is not speaking the truth in his weekly May/Mac column for The Irish News.

“Obviously [Malignaggi] saw that picture and his pride was dented. I can understand that, but at the same time he was on TV doing interviews the week before, talking about Conor’s power being overblown and all this stuff. He was talking to Mayweather’s guys, talking to pro boxers and doing interviews – what did he think was going to happen? Did he expect to just come in here and talk s—t?”

Bradley does bring up a good point, what exactly did Malignaggi think was going to happen? Especially after what McGregor’s camp thought to be less than constructive criticism from him in the media. The more interesting part is what Bradley had to say about Paul Malignaggi and Conor McGregor’s sparring sessions. One that he believes McGregor won.

“People can make up their own minds when they see the video. Paulie has done plenty of talking, but he could be talking himself into a hole when the footage comes out after the Mayweather fight. […] As for the ‘knockdown’ itself, you can make your own mind up when the footage is eventually released, if anybody even cares by that stage. I’ve seen people say that, from the photo, you can tell that it was a push down by the body language of Joe Cortez. I can tell you now – Joe didn’t see the incident that led to Paulie being on the ground. He didn’t see it. At the end of the day it was a spar, so what is he going to do – give him a count?”

“On the Thursday, we were getting changed after training at the UFC performance institute and that’s when Paulie saw the photo for the first time. He was clearly pissed off, showing us his phone, saying ‘what the f—k?’ or whatever. It was weird though because after that Conor came into the changing room but Paulie didn’t mention it, even though they did speak. We were in the car home from training to get food and Paulie was like ‘drop me back to the house’. You could see he was hanging his head, thinking about things. He was in a bad mood. We left him to the house and when we came back he was gone – we were only away about 45 minutes. He must’ve been straight in, suitcase packed, out the door.”

That’s the money maker, right there. Bradley doesn’t think Malignaggi left because he was pissed about unflattering pictures “leaking” to the media, he claims Malignaggi left McGregor’s camp because he was demoralized in the gym. If the pot keeps stirring like this, McGregor could have another boxing match lined up no matter what happens.