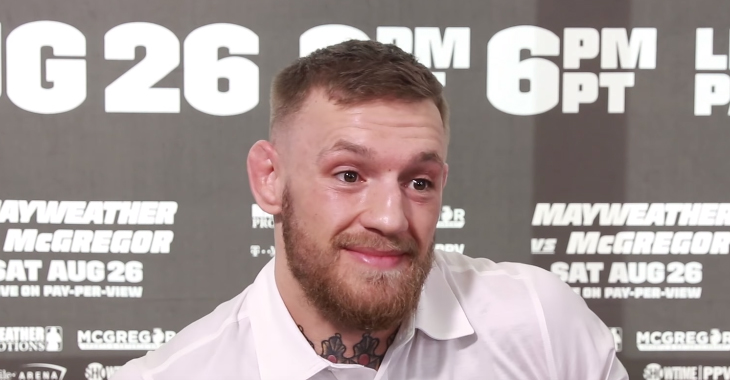 If the chaos caused by Conor McGregor and Floyd Mayweather wasn’t enough, there is this whole other entity gestating and growing with Paul Malignaggi. After Malignaggi launched some criticism at McGregor during his analyst duties, he was invited into McGregor’s camp. Of course, everyone knows what went down next, or at least in part. After that infamous knockdown photo leaked, weeks of conversation followed. Just last night, it reached a fever pitch as Dana White dropped the bomb by posting the footage that everyone wanted. …Which just caused more talk. Talk that has Conor McGregor worried about Malignaggi.

“The spars were not good for him. He took a lot of head trauma. We were actually worried about him.” – McGregor on Malignaggi. #MayMac pic.twitter.com/oOwNCsyHsX

“When I heard the stuff he was saying, I was like, that’s concussion talk. The man was badly, badly concussed. Look at his face. He was busted up bad. He was looking for an exit. The spars were not good for him. He took a lot of head trauma. Straight after it, we were worried. The sparring partners were actually telling us that when he was dropped back to the home he was stumbling out of the car after the 12-rounder. We thought the worst was happening. He was certainly badly concussed. And then he just got out of there and started running.” — Conor McGregor on Paul Malignaggi last night at the open workout.

Whether Conor McGregor is genuinely worried about Malignaggi, it doesn’t really matter. Either way, McGregor continually has used Malignaggi’s involvement to sway opinions, come out on top, and move numbers. With the damning clips of him snapping Paulie’s head back and “knocking” him down, people are just going to be talking about McGregor even more leading up to August 26th. Any publicity is good publicity, and ol’ Conor has all of it.