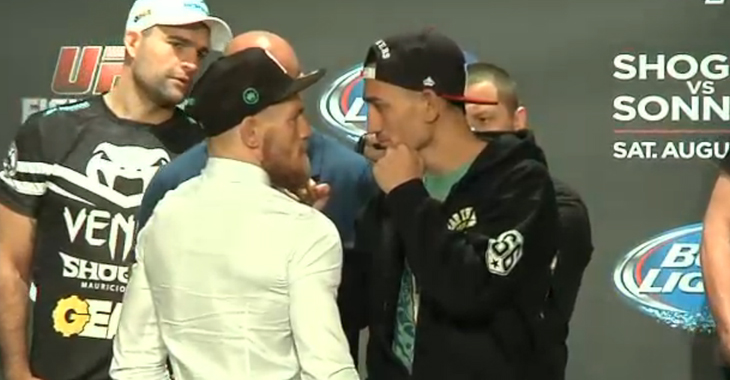 On Friday last week, Conor McGregor made his first major public appearance since his boxing match with Floyd Mayweather. We didn’t learn much from the man, other than he has options open to pretty much fight anyone he wants to in his UFC return, but we already knew that. Out of the about seven names mentioned, Max Holloway was one of them. The “champ champ” took out time to praise Holloway and didn’t rule out a rematch. However, it’d have to be in the 155-pound division.

“I sonned that young boy. I’m not mad at [Max Holloway]. He’s done a great job. He’s climbed up and claimed that featherweight belt. You see some fights, and so do the public, you see him go in there and you watch him win or lose and you watch how they act and how they carry on. He lost to me and he took it on the chin, he kept his mind frame sharp. Same with [Dustin] Poirier, he’s another guy who kept his mind frame sharp and carried on. [Eddie] Alvarez as well, he took it well – you’ve got to take it on the f-king chin.”

“You’re gonna’ win some, you’re gonna’ lose some. Get back on your bike, study the game a bit more, put in that extra bit of work and correct those errors that you’ve seen – carry on. That’s what I’m doing. That’s what I’ve seen [Holloway] doing. He went on to capture the unified belt off of [Jose] Aldo, even though I beat both of them. Look, it’s a hard one for me that one. If he wants to come up, then maybe. We’ll figure it out. That’s another option, but it’s a low down the totem pole option.” – Conor McGregor speaking at his Glasgow event.

Up until McGregor’s rematch with Nate Diaz, the fight with Max Holloway was the first time in McGregor’s entire career that a fight went to a decision. Both men were also injured during their scrap at UFC Boston back in 2013. Of course, Holloway hasn’t loss since and captured the UFC featherweight title. The story is there for a champion versus champion match-up, but Holloway would have to skip out on the division he worked so hard to conquer. He’ll defend his title at UFC 218 against Frankie Edgar, the same guy everyone said was McGregor’s kryptonite.