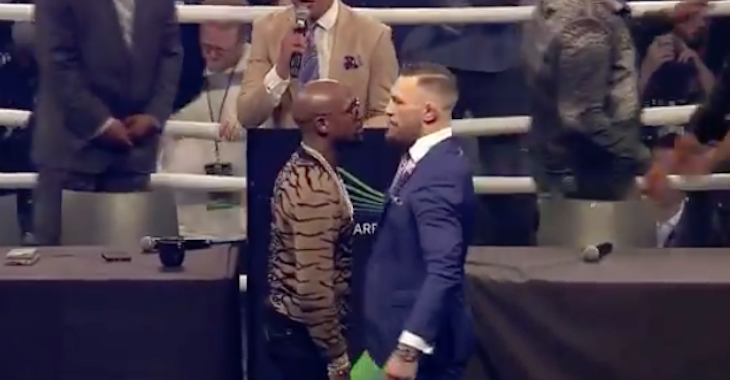 Pro wrestlers are trying to fight MMA, fighters are running the ropes in wrestling rings, and everyone seems to want to box. It seems that the new success in combat sports if to be flexible and chase the money wherever you can find it. One of the latest transfers is Heather Hardy, who made her successful Bellator debut against Alice Yauger at Bellator 180. She’s an undefeated boxer who still — and intends to defend — her WBC Female Super Bantamweight and Featherweight titles. So, when she started talking about Conor McGregor boxing Floyd Mayweather on The MMA Hour, it’s a good voice to listen to. That is, in between the chuckles.

“If Conor was going to steal Floyd’s wallet, I don’t know if he could get it back on the street.” – Heather Hardy #TheMMAHour

“….But this is boxing and you have to call it what it is.” #TheMMAHour https://t.co/veRwkoG8Oc

.@heatherhardybox says women are tough, “you should see us give birth!” and no argument from @arielhelwani there! #themmahour pic.twitter.com/wEqOYr5Gcb

“I ain’t knockin’ [McGregor]. He’s making $100 million. He did something right now, so I can’t say one thing or the other about him. I can say [his open workout] looks a little silly though. I think [the fight with Mayweather] is great. So many guys are like, I refuse to watch, it’s terrible for boxing. It’s like an event. It’s like when the Yankees and the Mets play each other. It doesn’t matter. None of the stats count towards their end of the year stats. The win or loss doesn’t count, but all New Yorkers can’t wait to go see the Subway Series. It’s like an exciting thing for fans but this will never mean anything. To me, this will never mean anything.” Besides Mayweather being one of the best defensive boxers ever, Heather Hardy thinks that MMA fighters just won’t fare well in an legit boxing contest because striking in MMA is just fundamentally different. Mainly, because MMA fighters don’t move their head. This is a good point to bring up because, well, Mayweather moves his head. A lot. Like, a whole, whole lot.

“I’ve been in the gym with top, top MMA fighters. […] They don’t know what they’re doing in regards to boxing. Boxing for MMA, I’m seeing different things then boxing for boxing. It’s not right or wrong, because whatever they’re doing for boxing is working for their career in MMA but if they were to apply to boxing, I mean, what’s the biggest thing? I have yet to really see an MMA fighter who moves their head. Who gets their head out of the way. So, when you look at MMA fighters who have all these knockouts with the 4oz gloves, which again are much, much, smaller and harder than a big padded boxing glove, they’re hitting a guy who’s not moving their head.”

There you go, McGregor. If you listen to one thing Hardy said, move that big, Irish head.