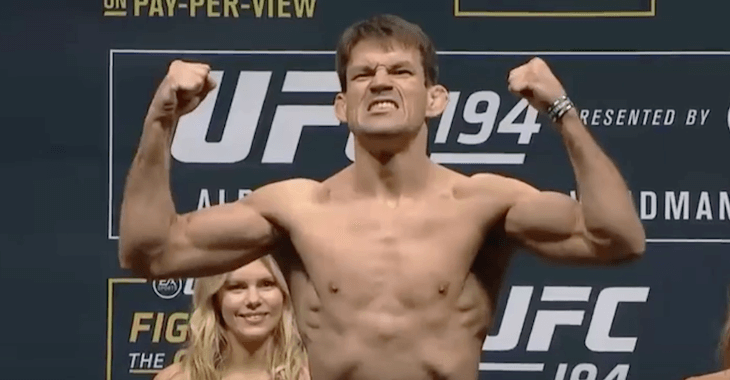 Leading up to Conor McGregor’s UFC 205 scrap with Eddie Alvarez earlier this month at UFC 205, the featherweight champ was involved in quite a few backstage incidents with welterweight champion Tyron Woodley.

To kick off fight week, both men appeared alongside several other of the fighters from the historic card for the UFC 205 press conference. During the course of the event, McGregor stole Eddie Alvarez’ lightweight championship, stirring up quite a bit of controversy. Following the stunt, McGregor proclaimed that he was coming for all the belts on the stage, which included Tyron Woodley’s welterweight championship.

This set the stage for two intense run-ins the following day, where the two men had an impromptu staredown Friday morning during the early weigh-ins, leading to a bitter Twitter feud as McGregor repeatedly called the welterweight champ a “bitch” despite numerous warnings from Woodley. Later in the day, the pair nearly came face to face once again, this time having to be separated by security guards as McGregor continued to yell insults at the welterweight champ.

Following McGregor’s impressive win over Eddie Alvarez, the two-division champ teased a move to welterweight at the post-fight press conference.

The way top ranked welterweight Demian Maia sees it, McGregor won’t actually make the jump to 170. He spoke to MMAJunkie: “I don’t think he’s going (to move up),” Maia said. “I don’t think it’s very smart to do that. The guys are way too big for him. He’s a great fighter. He proved that in the last fight. His distance control reminded me of Anderson in his prime. But I think he wouldn’t go up. He has more interesting fights to do.

“He’s asking about (Floyd) Mayweather in boxing. He could do a rematch with Nate. He can defend his title against (Jose) Aldo (interim featherweight champ) or Khabib (Nurmagumedov, lightweight contender), so I don’t think he will go up.”

McGregor of course has competed at welterweight twice in his UFC career, going 1-1 as he was submitted by Nate Diaz at UFC 196, and then avenged his loss at UFC 202 earlier this year.