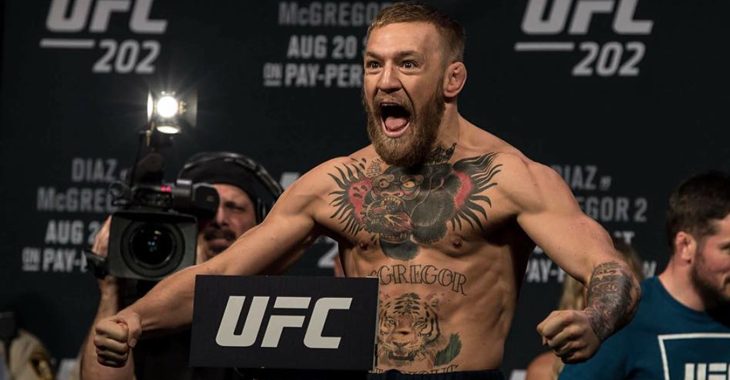 Footage of the moment showed Woodley walking past McGregor, who proceeded to eye down the welterweight champ as he passed by. Woodley recognized the situation and appeared to say something to the featherweight champ before walking off. Shortly after the encounter, Woodley responded to a Tweet about the matter on social media, saying:

Highlight of the AM: Woodley nodding to McGregor, McGregor saying nothing, staring down Woodley and then a brief, impromptu face-off. 😳

@arielhelwani I said what's up then he tried to flex. Quickly he realized it was a NO FLEX ZONE💪🏼🚫Pretty much made him say what's up! JS

@arielhelwani Some of us are really about that that life! The quiet ones are the ones really from the slums. Don't make me go back.

This prompted McGregor to respond, saying:

Woodley then responded with:

This isn’t the first time there has been an intense encounter between the pair. Earlier this week at the UFC 205 press conference, McGregor stated that he was coming for “all the belts” on the table, which included Woodley’s welterweight championship. The statement didn’t sit too well with Woodley, who once again stated that fighters at 170 have a different level of power than fighters at 155 or 145 do.

In addition, Woodley had some harsh words for McGregor in the past after McGregor called Woodley a “bum”. The welterweight champ responded by saying: