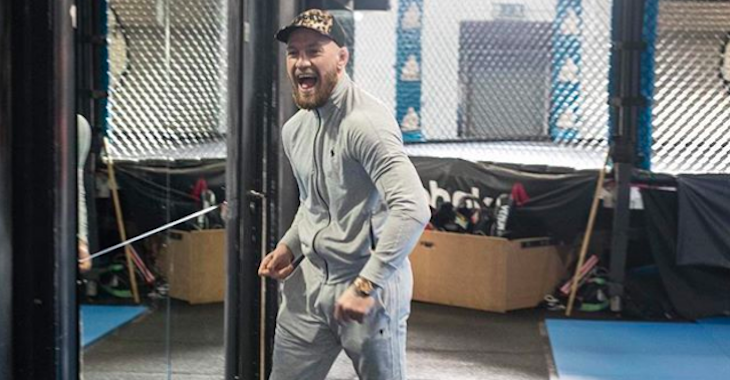 Over the last few weeks, there has been a tidal wave of buzz surrounding undefeated boxing legend Floyd Mayweather’s possible move to MMA. Of course, the chances of this move actually occurring seem almost non-existent, but Mayweather has been having some fun playing with the idea on social media, and his arch rival Conor McGregor has not shied away from getting into the conversation.

Mayweather’s latest MMA-related social media post occurred early on Sunday morning, when he posted a photoshopped image of himself elbowing Conor McGregor, inside a cage, decked out in four-ounce TMT gloves.

“Certified Killa vs Certified Bitch,” Mayweather said in the caption for this Tweet.

McGregor then fired back at his rival with typical promptness and heat, sharing an un-doctored photograph of himself elbowing Nate Diaz in one of their 2016 bouts.

A real elbow in a real fight. pic.twitter.com/9kZ7Opw8Zl

“A real elbow in a real fight,” McGregor said of the boxer’s edited post in his reply.

Again, the chances of this fight actually occurring seem incredibly slim. That said, UFC President Dana White has been doing his part to contribute to the buzz, recently asserting that McGregor and the UFC are owed a rematch with Mayweather in the MMA arena.

“You know, Floyd said leading up to the [boxing match] with Conor that he would do both [boxing and MMA],” White said on a recent episode of UFC Tonight. “So we’ll see what happens. Obviously, the only way making that fight [with McGregor] again makes sense is if [Mayweather] comes into the Octagon. We went over and boxed him – the UFC and Conor McGregor – and now it’s time for him to reciprocate and come fight in the Octagon.”

Do you think we’ll see Floyd Mayweather and Conor McGregor meet again in the Octagon?