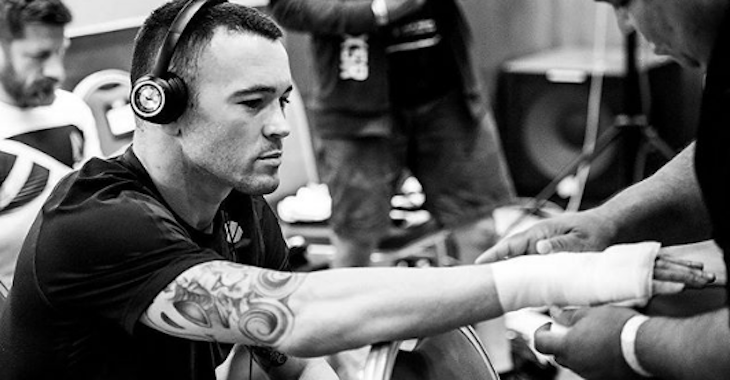 Colby Covington is one of the most talked about fighters in MMA right now. Unfortunately, much of the talk about him has been negative.

Public discourse surrounding the welterweight star picked up when he insulted the entire country of Brazil after his recent win over Demian Maia. It reached a boiling point when he had a run-in with Brazil’s Fabricio Werdum in Australia, and got a boomerang thrown in his face in the process.

Speaking on a recent episode of The MMA Hour, Chael Sonnen, another fighter known for clashing with the nation of Brazil, gave his take on Covington’s recent action. Perhaps unsurprisingly, Sonnen is all for it. Furthermore, he believes Werdum is the one who acted unprofessionally.

“I love [Covington], I think he is a ton of fun and I think what Werdum did was a scumbag move,” Sonnen said. “That’s the second time Werdum has done this, let’s not forget that last time he did it was with a 155-pound Tony Ferguson. It’s just really weird.”

Sonnen then explained that what Covington is doing is not new, just a little different.

“As far as Colby goes, listen man, if you want to make an omelette you have to crack a few eggs. What the hell is he doing wrong? I will remind you, I have known Tyron Woodley from way back when and I saw Tyron do the same thing. He had a different approach, but don’t make any mistake, Tyron stuck his finger in every single chest and used every single microphone he had to to get his opportunity.

“He even said he’d fight his own teammate, he did, and he knocked him out,” Sonnen continued. “He wanted to climb the mountain and wouldn’t let anything stop him and Colby is doing the same thing. I don’t think anyone can judge Colby in some unfair light. He’s got his own approach, he is being himself, this isn’t a act as I have known him since he was 11 years old. He grew up two hours away from my front door. He’s been a rough guy his whole life, he’s been wanting to get into UFC since high school, college, he had his dream here he is and he’s want to get some notice and boom. What the hell is wrong with that?”

What’s your take on the Colby Covington situation?