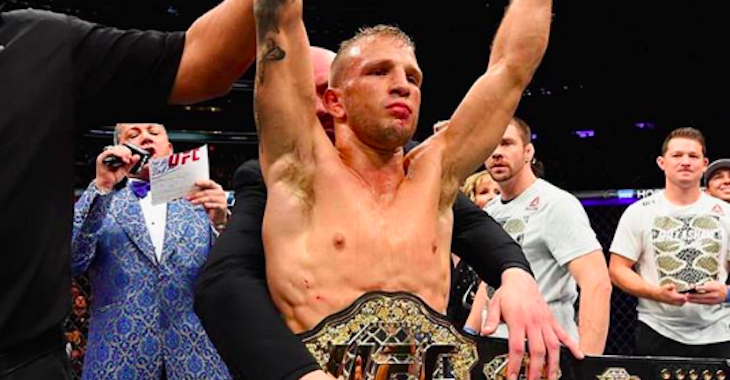 Back in January of 2016, TJ Dillashaw lost a split decision to Dominick Cruz, surrendering the UFC bantamweight title in the process. Almost two years later, after lopsided thrashings of Raphael Assuncao and John Lineker, Dillashaw reclaimed the title with a second-round knockout of Cody Garbrandt at UFC 217.

Speaking on the latest stacked episode of BJ Penn Radio, the bantamweight champ explained that he expects Garbrandt to endure a similarly long road back to the UFC bantamweight title.

“Oh man, he’s got a tough road ahead of him,” Dillashaw said of Garbrandt. “He’s got some guys in the weight class that are going to definitely challenge him. We’ll see if he can get through them. I think he was a little hyped up [before our fight]. He had a great fight against Cruz. He’s a great fighter, very fast, very explosive and powerful, but just ahead of him, so we’ll see. I feel like he’s gotta earn his spot. I lost a split decision victory to Dominick Cruz where, not only me, but the UFC thought I won that fight and it took me two years to get that fight back, you know what I mean. It’s one of those things where I had to work my way back. Had to beat two number one contenders to get my shot.”

What do you think of this assessment from the UFC bantamweight champ TJ Dillashaw?