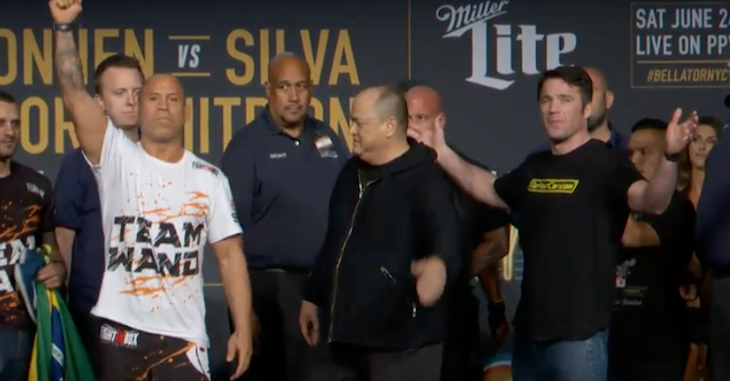 Chael Sonnen picked up his first win since August of 2013 last night at Madison Square Garden in New York.

The fight played out as many expected it would, with Sonnen utilizing his strong wrestling skills to keep “The Axe Murderer” on his back for the better majority of fifteen minutes.

Wanderlei was able to drop Sonnen in the first-round, this after scoring a knee followed by a punch, but was unable to put Chael away after the knockdown.

Here is how the pros reacted to last night’s Wanderlei Silva vs Chael Sonnen scrap:

This is Chael Sonnen 2.0 – just has to stay away from that Kryptonite last second submission…

The only way Chael loses this fight is if he gasses. #BallatorNYC

Bellator, where title fights are the prelims. #Bellator180

Will Wandy shake hands after this L? Yall acting like it was about to be a barn burner. Chael does what he does.

Wandy has been fighting for 50 years, should have worked on his takedown D. That's like getting mad at football team for running the ball.

Who would you like to see Chael Sonnen and Wanderlei Silva fight in their next Bellator MMA appearances? Sound off PENN Nation!