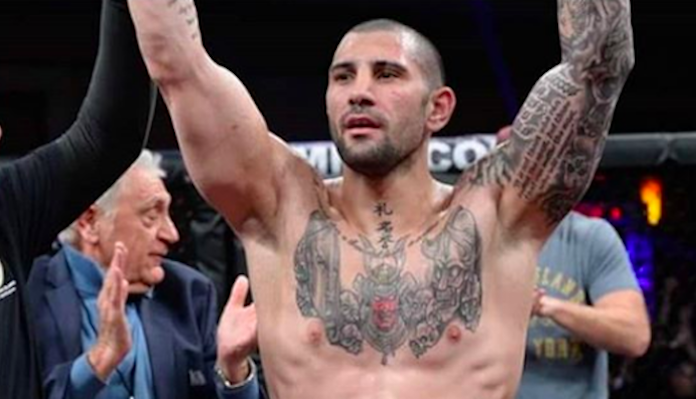 John Gotti III has already developed a big name as he continues to develop in the sport of mixed martial arts. One person that seems to be watching Gotti’s development has been none other than UFC president Dana White.

Prior to Gotti’s unanimous decision win over Marcos Lloreda at Friday night’s CES 60 event, White put out a Tweet to let the masses know that the fighter — the grandson of the infamous mob boss — would be competing on UFC Fight Pass.

John Gotti III is undefeated with all of his wins coming via 1st round TKO. He fights LIVE TONIGHT on @ufcfightpass.

Gotti saw this bit of promotion from White, as he told members of the media Friday night at Twin River Casino in Lincoln, RI following his fourth professional victory.

“No pressure, right,” Gotti said. “I’m sitting there getting my hands wrapped and I see that. Now if I lose, I’m gonna feel like the biggest embarrassment on the planet. But it was nice of him to do that and it was nice to get that kind of exposure.”

For the first time in his professional career, Gotti competed in a fight that went to the judges’ scorecards. Not only that, it was the first time the 27-year-old had a fight get out of the first round. Gotti was tested by Lloreda, but with several hundred supporters in the crowd, the Long Island MMA product was able to dig deep and pick up the win.

While Gotti is certainly happy that he is on White’s radar, he knows he still has some things to improve on before stepping up to the UFC stage.

“I still have a lot of work to do,” Gotti said. “Once I sharpen up on these areas [I need to work on], then we’ll be ready for that next step. The sky’s the limit if I just keep progressing.”

With a 4-0 record, and a recognizable name, Gotti would certainly be a guy White would target for this summer’s Contender Series slate of cards. Although he doesn’t seem completely opposed to the idea, Gotti wants to make sure he does it when the time is right and wants to gain a little bit more experience in the cage first.

“I definitely want to improve my game a little bit more, maybe fight for a belt [in CES], maybe take one or two more fights and then we’ll take that next step.

“I’ve been saying this since my pro debut: one fight at a time. I’m never looking ahead, that’s just me. People jump too soon to the UFC and come up short. I don’t want to be one of those guys. I just want to be prepared to the max because these guys are no joke.”

Do you think John Gotti III will end up in the UFC in the next year or two?