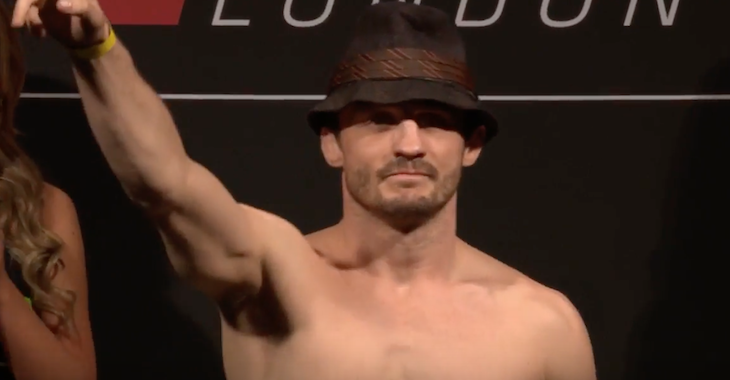 UFC veteran Brad Pickett stepped foot into the octagon for the final time earlier today in London where he squared off with Marlon Vera who had taken the bout on very short-notice.

Pickett was able to utilize some effective takedowns in the first two rounds of the fight and seemed to have the edge going into the contests third and final round.

However, Marlon Vera was able to turn the tide with some solid punches and kicks in round three before eventually landing a brutal head kick that sent Pickett crashing to the canvas with just over a minute remaining in the fight. Vera followed up with a hammer fist and the referee had no choice but to step in and put an end to “One Punch’s” hometown retirement fight.

It was not the swan song finish that Pickett was hoping for, but he did receive a lot of love following the emotional loss.

Here is how the pros reacted:

Wow what the fuck #UFCLondon

@chitoveraUFC yes! So proud of you pal!!!!! That looked like a bonus knockout to me 😁 @ufc

All the best in Retirement to the #legend @One_Punch from fighting on shows together in sports halls in Peterborough to ufc Sweden together👊 pic.twitter.com/tcaQ6qQSu2

MMA is so cruel. Would have loved to see Pickett get the win!

That was one of the most emotional moments I can remember in this sport.

I'm so fuckin proud of my boy @chitoveraUFC.

Thank you @One_Punch for a awesome, entertaining career. Going out like a legend.

Congrats @One_Punch on a great career! One of the UK's legendary fighters you've had an amazing career and the fans will never forget

@One_Punch thanks for all of the great fights and congrats on an amazing career. Always good to see guys be able to leave on their terms!

What was your favorite memory of Brad Pickett inside the cage? Sound off PENN Nation!

Check out the full Marlon Vera vs. Brad Pickett fight recap below: