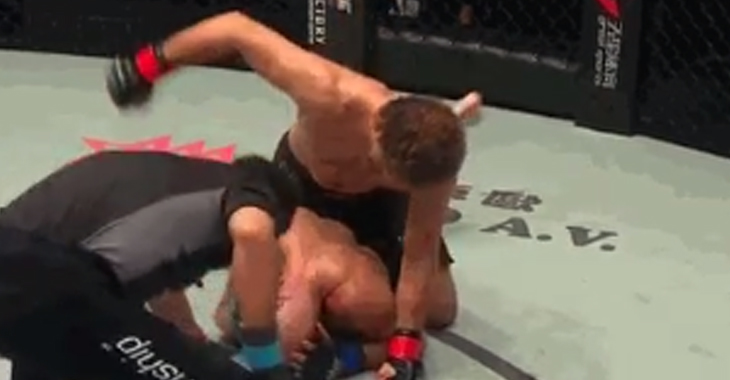 Ben Askren retains his title, tells @awawisconsin to get ready to get back to work on Tuesday. @FloWrestling #ONEShanghai pic.twitter.com/Hca3VTkJTY

Some fans have said that Ben Askren’s style is boring, but he’s finished five of his last six opponents. Actually, you can make that six in his last seven. The suffocating wrestler successfully defended his ONE welterweight title in China early this morning, by dishing out some relentless ground-and-pound to Zebaztian Kadestam. In case you didn’t have some MMA punch-face sport for breakfast, we’ve got all the highlights for you right here.

Monster slams and overwhelming pressure: The hallmark of any Askren fight. This is pretty much what you see for two rounds. Eventually, Ben Askren rode Kadestam and just kept punching in until the ref finally stopped the bout. This takes Askren’s record to 17 wins, absolutely zero losses.

Seriously though, he should be in the UFC. https://t.co/SmkegsX61q

So, what’s next for the funkmaster Ben Askren? Will he ever finally double leg into the UFC? It’s never looked like a possibility throughout Askren’s entire career, but you never know. We are in the era of superfights and there is a lot of money to be made. Two welterweight champions from different promotions finally meeting to settle who is the number one 170-pounder in the world is something that would sell tickets. Don’t hold your breathe though, as long as Tyron Woodley is still UFC champion. The two are training partners and close friends. …but not too friendly for Askren not to wink-wink-nudge his opinion on who would win if they did fight.

“I don’t like talking about [fighting Tyron Woodley] because Tyron is a good friend of mine and it would just create an awkward feeling. Well, I think I can make a strong argument. I’ve never been beaten.” – Ben Askren to IBTimes UK.