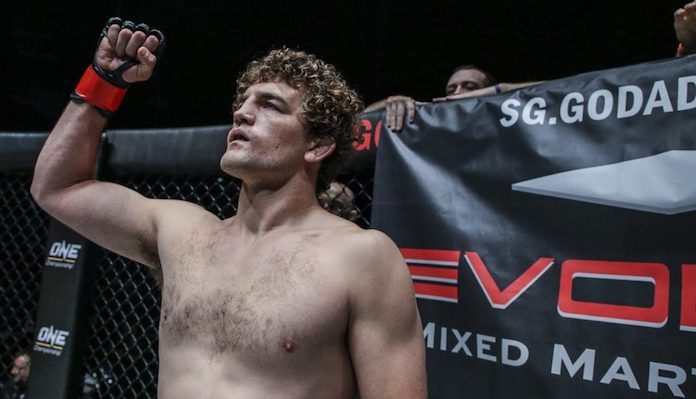 Former Bellator and ONE Championship welterweight kingpin Ben Askren isn’t impressed by Colby Covington. In fact, he considers Covington a value brand version of himself.

The ostensibly retired former champion shared his thoughts on Covington when responding to a fan on Twitter recently. Apparently, he’s not impressed by Covington’s ability, his record, or his patented trash talk.

Cmon @ColbyCovMMA is a poor mans version of me. Couldn’t accomplish in wrestling, got choked out by subpar Wallrey Alves and trash talking sounds like his IQ is 85(which it may be although I can’t confirm)! https://t.co/gJZpu4caP5

“Cmon [Colby Covington] is a poor mans version of me,” Ben Askren said on Twitter. “Couldn’t accomplish in wrestling, got choked out by subpar Warlley Alves and trash talking sounds like his IQ is 85 (which it may be although I can’t confirm)!”

This is not the first time Ben Askren has taken a shot at Colby Covington. Speaking to International Business Times late last year, the undefeated star made similar comments about Covington.

“Colby Covington is an idiot. He is so stupid,” Ben Askren said. “If he does [end up fighting UFC welterweight champion Tyron Woodley], he’s going to get beat up.

“Colby Covington has a very low IQ, he says a lot of stupid things and it’s almost embarrassing that he represents our country that way.”

Ben Askren, it should be noted, is a training partner of Tyron Woodley at Roufusport in Milwaukee. In fact, he could well be one of Woodley’s chief training partners, should Woodley be booked for a fight with Colby Covington as expected.

At present this Woodley vs. Covington fight is not yet official, but Covington has recently expressed interest in fighting Woodley at UFC 230 on November 3, and Woodley has said he’ll accept a fight with Covington if it’s offered.

What do you think of Ben Askren’s latest comments on Colby Covington?