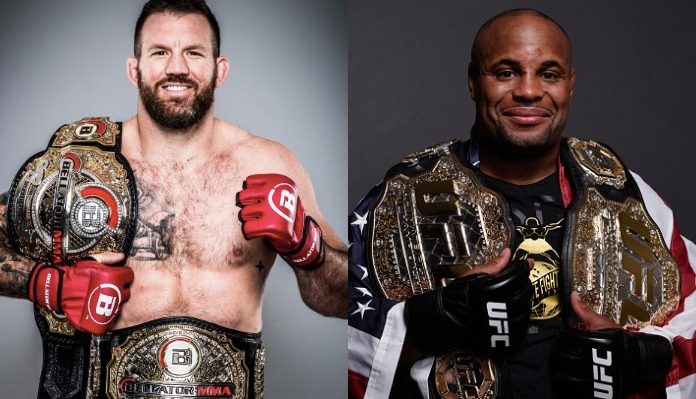 When Ryan Bader was in the UFC, Daniel Cormier called him the easiest fight in the light heavyweight division. Yet, a fight between the two never came to fruition and as “Darth” left in free agency for Bellator.

Even though Ryan Bader is in Bellator, he still wants that fight and revealed he and his management reached out to the UFC for a cross-promotional fight with Cormier.

“You know where I stand on the Cormier fight, I wanted that fight forever,” Ryan Bader said to MMA Fighting. “We tried to get Cormier [in] cross-promotion, champ-champ versus champ-champ fight, we reached out to see if there was any interest in doing a little cross-promotion. It’s probably never going to happen but you never know. It’s happened before in boxing, I don’t see the UFC doing it with Bellator but you never know.”

Although it is a fight Ryan Bader wanted, he says when his manager reached out to the UFC, the conversation was shut down rather quickly.

“My manager has a relationship with both [organizations] and he threw the idea out there. I don’t think it went too far but it’s one of those things where eventually something like that is going to happen,” Bader said. “You never know. It could happen with us.”

For now, Ryan Bader is set to defend his heavyweight title in the main event of Bellator 226 on Sept. 7 against Cheick Kongo. If he beats the Frenchman he says it will cement his place as the best heavyweight in the world like his promoter in Scott Coker says.

“For me, I believe that [I am the best]. If you don’t believe that, then you shouldn’t be in this sport. I do believe I’m the best in the world,” Bader said. “I believe coming up to heavyweight, I can shine. That’s where I feel the best in terms of being agile, speed, cardio, all that kind of stuff plus I have the power. It was nice to get that recognition, too. So now I just have to go out there and continue to prove it.”

Who do you think would win between Ryan Bader and Daniel Cormier if the two were to fight? Sound off in the comment section, PENN Nation!