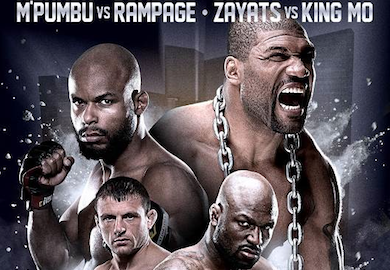 Bellator MMA returns to Spike TV with a bang as the promotion kicks off its tenth season Friday, February 28 at 9pm ET/PT. The star-studded card includes the tournament debut of MMA superstar Quinton “Rampage” Jackson.

The event will broadcast live at 9 p.m. EST/ 8 p.m. CST on Spike TV. The preliminary card will be streamed live and free on Spike.com beginning at 7 p.m. EST/ 6 p.m. CST. Tickets for the event are on sale now at Ticketmaster.com or by visiting the Mohegan Sun Box Office.

After making his mark with his first round knockout victory over Joey Beltran, Rampage is ready to put himself through The Toughest Tournament In Sports and earn a Bellator title shot.

For Lawal, the former title contender has heard the critics and is looking for vengeance after suffering his second loss to Emanuel Newton. As the tournament moves closer, King Mo only has one thing on his mind. Getting the Bellator Light Heavyweight Title.

Bellator MMA, which features The Toughest Tournament in Sports, will showcase five tournaments this season in different weight classes including featherweight, lightweight, welterweight, light heavyweight and heavyweight. The 12-week season, airing on Fridays at 9pm on Spike TV, will showcase many of the greatest mixed martial arts fighters from around the world in venues spanning across North America.

“Since we first partnered with Quinton, I’ve been working with him to get everything set for his inclusion in a Bellator tournament,” Bellator Chairman & CEO Bjorn Rebney said. “Working together, we’ve now made that a reality. This is without question the deepest Light Heavyweight Tournament we’ve ever done. Rampage, M’Pumbu, Zayats and Mo are all monsters and I can’t think of a better way to kick off our tenth season on Spike.”

Additional fight card information for Bellator 110 will be made available in the coming weeks.