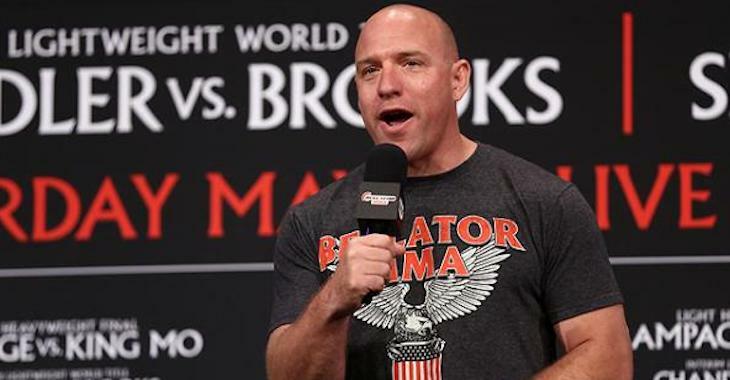 Last week, the MMA world was hit with the news that Bellator MMA had parted ways with long-time color commentator Jimmy Smith. Given that Smith is a bottomless pit of MMA knowledge with charisma to boot, this news came as a definite surprise. Apparently, however, the broadcaster’s departure from Bellator was quite amicable.

Jimmy Smith broke down his Bellator exit on a recent episode of The Joe Rogan Experience MMA Show.

“It’s not a Bellator thing,” said Smith (h/t MMAFighting.com). “They were great to work with. They were great about the whole break up thing. What happened was, I had a deal with an option year and 2018 was my option year and when I was in Verona, New York doing the Verona show, my boss sat me down and said, ‘We’re not gonna renew 2018, we want a different deal.’

“So that was it. When they were like, ‘We want to change the deal around,’ I was like, ‘Okay,’ and they did make an honest effort to keep me. They really tried, but they just didn’t make an offer that was worth me coming back. That was pretty much the deal so it’s kind of comparatively amicable.”

“I called Dana White about you, how many years ago, like four?” said Rogan. “I tried to get Jimmy Smith hired by the UFC four years ago. I was like, ‘Dude, you want better people, you want more people? Hire that f*cking guy. He knows what he’s doing, he’s excited, and he loves the sport. I was telling him you’re a great guy, he’s genuine, he’s a real fan and he’s f*cking good at it. Go get him.’”

“You f**ked up, Bellator,” Rogan added. “You f**cked up. I’ve been telling everybody that Jimmy Smith’s the best out there and you let him go. That’s a huge error on their part. I would be thrilled if somehow or another they were able to work it out where Jimmy Smith was at the UFC. That would be what I would like to see.”

Would you be interested in hearing Jimmy Smith call fights in the UFC?