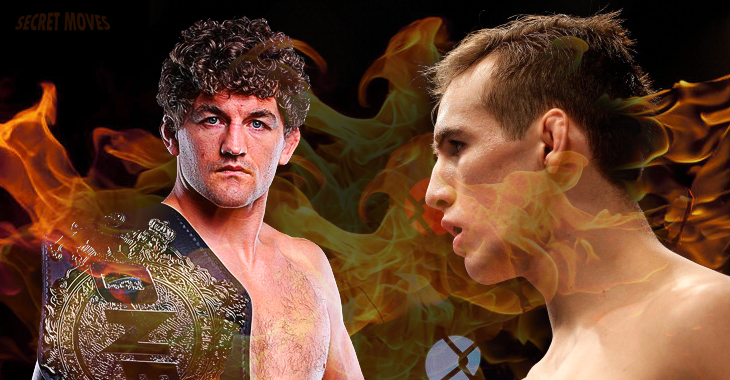 Despite what many may be led to believe, there is a flawlessly dominant wrestler outside of the UFC that may be a lot more well known than people assume. That wrestler turned undefeated multi-time MMA champion is none other than ‘Funky’ Ben Askren.

Askren went 18-0 in his professional career before semi-retiring this past November. Funky Ben was most well known for being the dominant champion of both Bellator and ONE Championship.

As mentioned, he’s now semi-retired. Meaning he’s still willing to fight…it just has to be against the best option.

Most notably, Askren has called for a fight with one of the MMA all-time greats, Georges St-Pierre and Askren has gone as far to proclaim that he believes the two will end up fighting in the UFC by next year’s end. The fans are interested in this idea as well as evidenced by a poll that BJPenn.com’s own Chris Taylor conducted back in November after GSP’s big middleweight title victory.

However, there was a time where Askren also had some interest in competing against one of GSP’s top proteges and teammates, the current Bellator champion, Rory MacDonald. Around the time of St-Pierre vs Johny Hendricks, Askren found himself looking for a new home and hoping it would be the UFC where MacDonald was quickly rising to the top in his division.

“I would fight for free and retire from the sport of MMA [If I lost] because that’s how confident I am that I will beat Rory MacDonald.” Askren told Bleacher Report in 2013

And now, it seems that there is interest on both sides for this potential clash between current and former Bellator welterweight kings as the two exchanged words on Twitter.

im good with that to

i have asked @ScottCoker about getting you in bellator for a fight, i guesse you need to do your part

MacDonald: im good with that to

MacDonald: i have asked @ScottCoker about getting you in bellator for a fight, i guesse you need to do your part

Askren: You think you could go the distance? I think I finish@you in round 3, the fight looks similar to what Condit did to you in round 3

For the ‘Red King’ Rory MacDonald, he just recently became the Bellator 170-pound champion when he defeated Douglas Lima by unanimous decision back in January. Askren, on the other hand, held the Bellator title from 2010-2013 and defended it four times(including a win over Lima as well).

Would you be interested in seeing Askren return to the house he made his name in to challenge their new king?