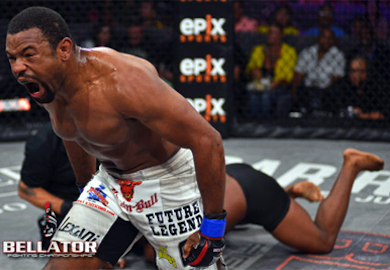 “I just see Bellator definitely surpassing UFC. It’s already happening. [The UFC] is not very personable with the fighters. They don’t really have the fans understanding what the fighters went through, understanding their camps. I think Bellator does that very well. They really follow the fighters, so it makes the fans fall in love more — kinda like the WWE, the soap opera storyline, but this is not fake. Fighters aren’t coming out of the woodwork from nowhere, and all of a sudden being spectacular fighters. You watch Bellator shows and you know there’s always finishes. You watch UFC and sometimes it’s just boring. Granted, the UFC can put on a lot of good fights too, but I’d much rather watch Bellator than UFC.”

Anyone buying what he’s sellin?