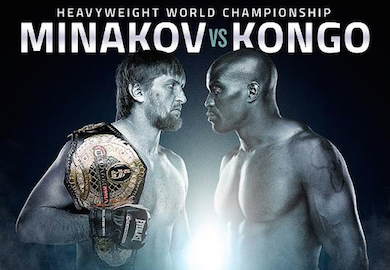 At 13-0 and the undefeated Bellator Heavyweight World Champion, Russian knockout connoisseur Vitaly Minakov is ready to extend his reign as “The New Emperor” and defend his world title against Cheick Kongo live on Spike TV Friday, April 4th from Nevada’s Reno Events Center. The night will also feature the Bellator Middleweight and Welterweight Semifinals, along with a full card of local talent.

The event will broadcast live starting at 9 p.m. EST/ 8 p.m. CT on Spike TV. The preliminary card will be streamed live and free exclusively on Spike.com starting at 6 p.m. CT.

Originally scheduled to face Doug Marshall in the Bellator Middleweight Tournament Semifinals, Florida’s own Dan Cramer will now face Jeremy Kimball. Marshall was removed from the card after having his suspension from the Pennsylvania State Athletic Commission extended by the Nevada State Athletic Commission. With his absence, Kimball will now step in a look to punch his ticket to the tournament finals with a win over Cramer.

Reno’s own Oscar Ramirez will kick off the Spike.com show in a fight against Benito Lopez. Lopez will make his professional debut against Ramirez, who holds a 2-0 professional record, both ending with a finish victory.

Riding a six-fight win streak with four victories by knockout, Josh Appelt will face Freddie Aquitania. Appelt is looking to grab another knockout in front of the Reno Events Center crowd, but will have to take down Aquitania who has only one professional loss.

Making their professional debuts, Jordan Powell and Sinjen Smith will face off in a lightweight battle. Fighting in front of his home state crowd, Smith is ready to put on an exciting fight for the fans and looking for an explosive finish against Powell.

After winning his last fight by first round submission, Rick Reeves is anxious to make his Bellator debut against James Terry. With eight of his nine victories coming by submission, Reeves will look to his ground game to take down Terry on April 4th.

At 10-0 Volkan Oezdemir will face Kelly Anundson in a light heavyweight battle. Known for his powerful striking, Oezdemir has eight victories by first round KO and is looking to land another knockout in his fight against Anundson.

With six first round finishes is in last eight fights, Herman Terrado will return to the Bellator cage to fight Justin Baesman. Winning all of his 11 victories by KO or submission, nine in the first round, Terrado plans on ending his fight with Baesman as quickly as possible.